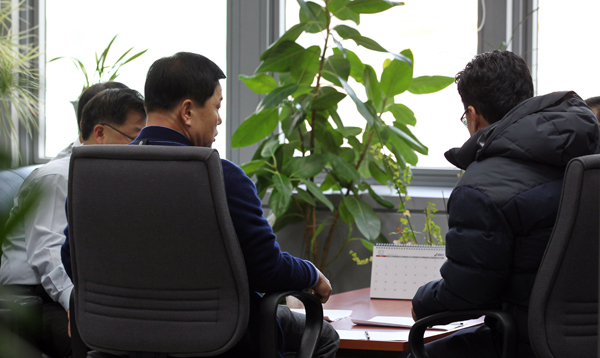 Officials from the Korean Volleyball Federation talk during an emergency meeting at their headquarters in Seoul yesterday. By Kim Jin-kyung


Korean sport was rattled last year by a match-fixing scandal in the K-League that made headlines around the world.

But corruption in Korean athletics seems to have reached beyond football as three players from the Korea Professional Volleyball League (V-League) - two retired and one active - were arrested yesterday on suspicion of rigging games for financial return.

The Daegu District Prosecutors’ Office announced yesterday that they have taken three former and current Suwon Kepco 45 players and one gambling broker, surnamed Kang, into custody as part of their ongoing investigation into a match-fixing scheme. All four men are currently waiting to be indicted.

The Korean Volleyball Federation (KOVO), the governing body of the V-League, said that it will cooperate with the prosecutors and will act after the investigation.

The prosecutors said that one of the suspected players, surnamed Yum, deliberately made mistakes during at least four V-League matches, including the match against the Cheonan Hyundai Capital Skywalkers, which Kepco 45 lost 3-1 to in February 2010.

Yum, who played as a libero (a defensive specialist in volleyball) and retired last July, received dividends from broker Kang, who earned his money through illegal betting Web sites, according to law officials.

It was reported that Kang gave 30-year-old Yum about 10 million won ($8,960) in return, and the player apparently gave some of the money to two other teammates participating in the scheme.

Yum said there were other players who were also involved in match-rigging.

Representatives of Kepco 45 said they were surprised by the players’ involvement.

“We didn’t know there was match-fixing going on in our club,” one of the officials from Kepco 45 told the JoongAng Ilbo.

“We just thought Yum was not a good player, but didn’t think he was deliberately making mistakes. He quit our team because of injury.”

Some fans wondered that since Kepco 45 was already at the bottom of the V-League in past seasons, the illegal gamblers would not have earned much from Kepco 45 losing a match.

But illegal gambling Web sites have many other betting categories beyond game results, which focus on other aspects of a match such as who will make the first mistake in set two or how many aces a player will get in set four.

Prosecutors said they suspect that Kang consulted with Yum and used information to bet at least 50 million won on illegal gambling Web sites. Unlike Sports Toto, the only licensed sports lottery in Korea which sets 100,000 won as its maximum bet, illegal betting Web sites have no betting limits.

The incident was revealed just a day after the Ministry of Culture, Sports and Tourism decided to revise the penalty for those who take part in match-fixing schemes or operate illegal gambling Web sites.

In the revised law, offenders can be sentenced to up to seven years in jail or be fined a maximum of 70 million won ($62,570). It also strengthened the penalties for people who designed the sites and who provide game-related information to site operators as well as those who make bets.

The Daegu District Prosecutors’ Office said it is planning to expand the investigation to other V-League teams. The prosecutors expect that the scale of the scandal will be smaller than the K-League’s, in which more than 40 players were arrested or indicted last year. Results of the investigation are expected to be announced late this month.