Singer takes long journey back to self

Singer takes long journey back to self 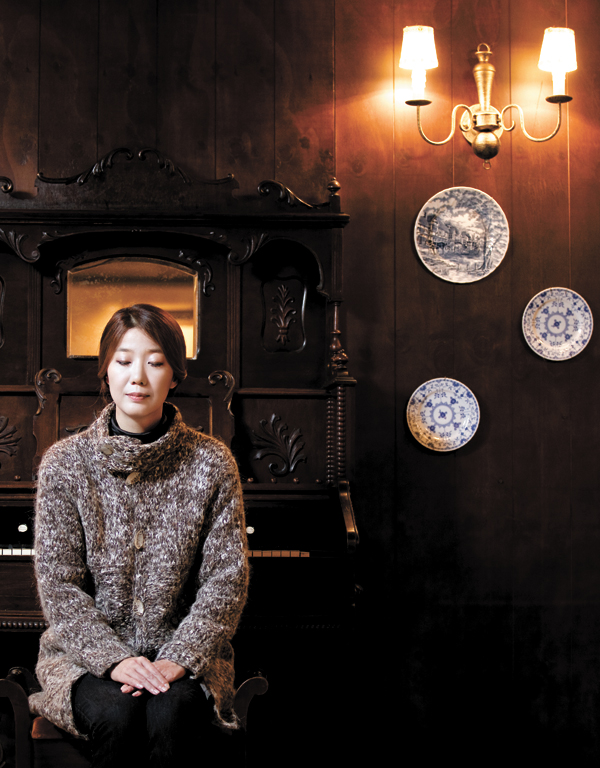 Singer Lee Sang-eun, who rose to stardom after her song “Damdadi” became a hit at the Gangbyeon Song Festival in 1988, is now working on her 15th album. By Park Jong-geun


If you’ve just started to get into Korean music, there’s a good chance that you haven’t heard the song “Damdadi”. But when you hear its catchy melody, it might sound familiar. That’s because it’s actually been around for more than 20 years.

“Damdadi” was first introduced by singer Lee Sang-eun in 1988 at the Gangbyeon Song Festival, which was established in 1979 and was considered a gateway to success for emerging artists in the late 1990s. Just like other festival winners, Lee Sang-eun gained instant stardom with the song and she followed her win with appearances on numerous television and radio shows. 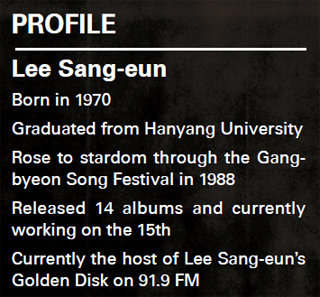 But a year later, she had left the country, saying she needed time off to regroup and discover who she was. She took off to New York to study art before settling in Japan, where she started making music again with the help of a mentor. Ten years later, she finally returned to Korea to relaunch her career here. She is the currently the host of her own radio show and is working on her 15th album, which is set to be released later this year.

The JoongAng Ilbo met with the singer at a cafe in Hongdae to talk about finding fame, finding herself and passing her knowledge on to others through her music.


Q. You’re celebrating the 25th anniversary of your debut this year. Since winning fame with your hit song “Damdadi,” you’ve matured as an artist. What’s your passion now as a singer?

A. I have two very extremely different passions. One is bohemian. I want to be free and only pursue the arts. That’s why I’m also interested in healing through the arts. Another passion is practicality. I want to be socially recognized, make money and work with world-renowned labels. Those two things coexist in my mind.


You had two concerts at the end of last year under the themes “Feeling” and “Healing.” Why did you choose those themes?

The first time I sang “Damdadi” was at the Gangbyeon Song Festival in 1988. Some time later, the mother of a kindergarten girl with autism told me that her daughter had responded well to the song. Later, that girl went on to college. That’s what made me realize that music has a healing power.


Your song has helped others to find their way in life. Did it help you?

When I first sang the song, I was a freshman in college. I became famous in an instant and was invited to appear on TV and radio shows. I got so many invitations from so many different places and I didn’t know how to handle it. No one gave me advice or told me what to do or not do.

I kept on singing and eventually reached the Gayo Top Ten [a music countdown program]. But I realized that it wasn’t what I wanted.


You must have felt lost. Yet you were still popular. How did you cope?

But it felt like I was being worn out, too. Back then, I didn’t know the difference between appearing on a comedy show and DJing for a late night radio show. I never thought finding a way to live would be so difficult.


Is that why you left for New York the following year in 1989?

I gave up music and chose art.


You studied at the Pratt Institute and then went to Japan, where you stayed for about 10 years. What were you hoping to do in Japan?

I was trying to find the answer to the question, “Why do I sing?” I’ve been singing since I was young and ever since I started I’ve always asked myself that question. I enjoyed being popular and I liked having people recognize me. But I needed more meaning in my life. And that was something I didn’t know how to find.

But then I met Izumi Wada, who produced my album “Gongmudohaga” [1995]. He told me that I should work on my music overseas, because location is important and as artists we need to get away from our everyday routines and take some time to meditate. He also said that we shouldn’t wait for circumstances to change but to change them ourselves to create an environment that suits us.


When you say “recharge,” does that process include meditation?

Yes. For me, meditation is necessary.


What do you meditate about?

About my emotions. Many times, I feel blue and gloomy. And those emotions make me feel as if my heart is being torn apart. Whenever I feel that way, I try to get back on my feet through music. For me, it’s a healing process.


Could you describe that process?


What’s usually in those life reports?

Hurt and grief are the main subjects. The traces of my pain are all there. I get more feedback when I share my life story. But it isn’t easy to share my experiences through my music.


What makes it difficult?

In order to do it, I need to feel my experiences, emotions and scars all over again. And I also need to learn how to see through it all. Whenever I feel hurt, I need to find a way to learn from it so that the hurtful experiences can be absorbed into my music.


For a long time, when people heard your name, they would instantly think of “Damdadi.” What meaning does the song have for you now?

When I was pursuing music as my passion, I was a little ashamed of it. But now that I think about it, it’s because of the song that I’ve come to understand what I was running away from. I’m very thankful for that song.


What do you think of when you reflect on your early career?

I was very competitive in my 20s. I was fighting to get past what I had achieved before. I wanted to create something bigger than my music. It was like breaking a record. But in my 30s, I rose above that competitive mindset. I became calm and started asking myself what I really wanted.


What do you think your music will be like when you’re in your 40s?

Other adults have always put an emphasis on universality and I think they were right to do so. But I’d like to mix that concept with my own sensibilities. I want my music to retain the things that only I can share, yet contain something that reaches people. That’s the work I need to get done in my 40s.


Do you ever find it difficult to keep doing what you’re doing?

People are usually afraid of getting old, mostly because they feel they are losing something as they get older. I was once like that, too. Then I started thinking I should focus more on what I have than on what I’ve lost. I made a promise to myself that I would embrace what I have, and the more I do that the more I have come to value myself.


You’re also a DJ for a morning radio show. How does that shape your identity?

I think it’s another way of healing. I read many of the stories people send me for the program. Some say they didn’t pass an exam or broke up with a lover. I try to calm and cheer them up by reading old sayings on the radio. I’m happy that I can help people heal through my program and my music.


So it all comes back to healing?

Yes. It’s important to be able to see yourself clearly and learn from your experiences. I want to put my experiences into my music to heal more people.