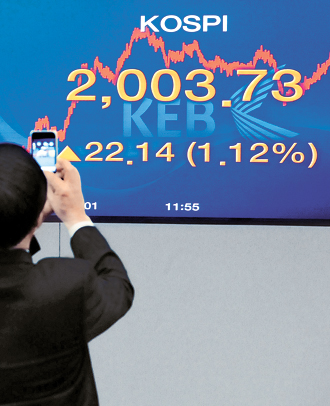 An employee at Korea Exchange Bank takes a picture of the Kospi’s movement at the bank’s headquarters in central Seoul yesterday as the main bourse lifted above 2,000 points for the first time in six months. [NEWSIS]

Korea’s benchmark stock index closed above the 2,000-point mark yesterday for the first time in six months after it slipped below the psychological threshold that signifies investor confidence last August, when the recent global financial turmoil began.

With yet another round of low-interest ECB funds expected at the end of February, experts predict the Kospi’s climb will continue beyond this month before flagging.

However, the benefits from capital markets’ so-called “liquidity rally” is not expected to reach the real economy as banks - especially in Europe - are focused on shoring up capital rather than lending. 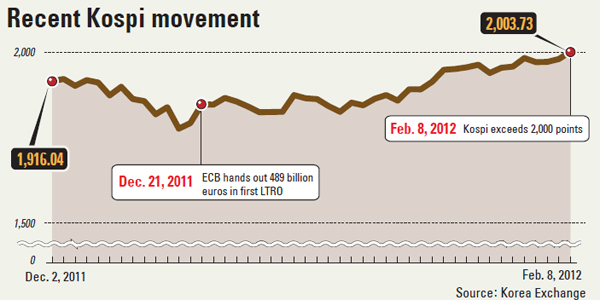 Yesterday, the Kospi closed at 2,003.74 points, a 1.12 percent jump from the previous day’s session. It finished above 2,000 points for the first time since Aug. 4, when investor sentiment soured due to the U.S. sovereign rating downgrade and flaring debt problems in the euro zone.

Like many other emerging market indexes in Asia, the Kospi has been inching up steadily since the beginning of 2012, gaining 17 sessions out of 26 so far.

Analysts agree that the latest rally owes a debt to foreign investors, who, as of Tuesday had snapped up roughly 8 trillion won ($7.17 billion) of Korean stocks in net purchases since the start of January. This marks a turnaround after they off-loaded 7.3 trillion won worth between August and December.

“Since the ECB put into effect its long-term refinancing operation [LTRO] in December, banks have been using the money to buy government bonds from nations such as Germany, France and Italy,” said Kim Hyung-ryul, an analyst at Kyobo Securities.

“Financial markets have regained stability in the process, and leftover liquidity has flowed to high-return investments such as emerging nations’ stock markets.”

Having first lent 489 billion euros on Dec. 21 to shore up banks’ capital and jump-start frozen interbank lending, the ECB is now planning a second round of LTRO of up to 1 trillion euros at the end of the month.

“The influx of foreign capital will continue throughout February,” said Cho Ik-jae, head of research at HI Investment & Securities. “Sectors that have seen comparatively small gains despite a good chance of improved profits can expect additional foreign buying.”

However, the recent vigor seen in capital markets has been divorced from the slowdown in the rest of the economy, evinced by the International Monetary Fund revising down its forecast for global economic growth from 4 percent to 3.3 percent late last month.

“The effect of the LTRO does not lead to a turnaround of economic conditions, but only serves to stave off a liquidity crunch by adding to [banks’] capital,” said Kim Dong-wan, an analyst at HI Investment & Securities. “This is because [banks] cannot increase their lending without first securing their capital positions.”

Rather, the massive influx of foreign capital into Korea is strengthening the value of the won against the dollar, raising alarm bells for exporters should the trend continue.