Finally, a smart TV with a high IQ

Finally, a smart TV with a high IQ 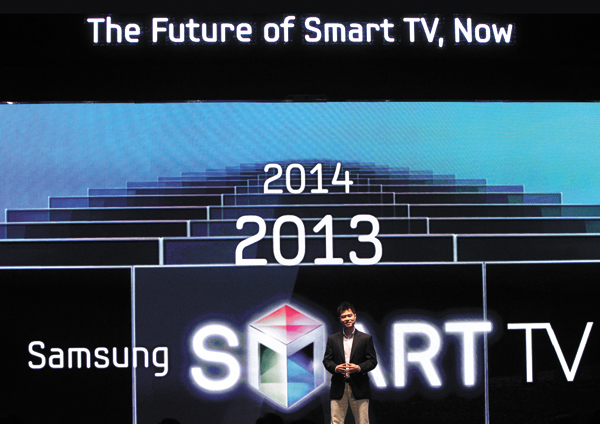 A Samsung Electronics employee explains the features of the ES8000 smart TV at a press conference yesterday. [YONHAP]

Weaned on foreign TV shows and science-fiction movies, young Koreans have had years to get used to the idea of cars and robots that listen and respond to voice commands.

And with the Siri personal assistant on its latest iPhone, Apple has transferred this technology to smart phones that fit in your pocket.

But televisions that heed your spoken commands are a new novelty altogether.

From today, Koreans will be able to buy smart TVs at high street stores that do for living room sets pretty much what the Nintendo Wii did for games consoles - make them more fun to operate. 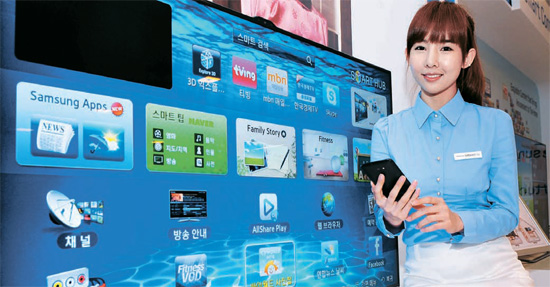 Samsung Electronics, the world’s largest manufacturer of flatscreen televisions since 2006, announced yesterday that it will start selling its latest ES8000 smart TV in Korea from today.

The device, which has a facial recognition system, was first introduced at the Consumer Electronics Shows in Las Vegas last month, where it won an Innovation Award for its high-tech features.

It can recognize users’ identity and automatically offer them content it calculates from previous viewing patterns that they will like. Meanwhile, hand gestures control the volume - without the need for a remote control - and switching the device on is literally as easy as saying hello.

Another feature that makes this device seem more futuristic is its ability to “evolve,” the company claims. It comes equipped with Samsung’s “Evolution Kit,” enabling it to upgrade its operating system automatically once rebooted.

Samsung has also improved the content of applications available for the TV, as well as the device’s design and processor. With this, the company says it will strengthen its dominance in the global TV market as it vies to retain its leading status in this segment. Previously, Samsung conquered the 3-D TV market in 2010 and the LED (light-emitting diode) TV market in 2009.

However, an initial sticking point could be the new set’s expensive price tag. The 55-inch model will cost in excess of 5 million won ($4,470), according to Samsung officials. It will be introduced to other countries soon starting with the U.S. at the end of this month.

Kim said Samsung will release a low-cost flatscreen TV in a month or two, adding that “the product development is finished.” Since E-mart released cheaper models last October, online and home shopping channels have followed suit. Feeling the pressure, both Samsung and LG have said they too will release cut-price models.

Kim also noted that nothing is set in stone regarding the company’s plans to re-enter the Japanese TV market, adding that he believes “more time is needed to study [it].”

Japan’s Nikkei daily reported last month that Samsung will start selling 40-inch or larger LCD TVs equipped with 3-D capabilities and Internet connectivity, as well as LED TVs with power-saving features, in the neighboring country from 2013.

Samsung ventured into the Japanese market in 2002 but failed to leave a strong impression there mostly due to its low brand recognition and Japanese consumers’ preference for local brands. It pulled out in 2007 when it held a 0.3 percent market share.