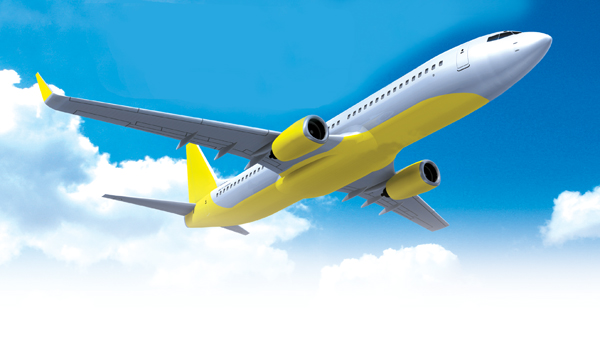 Local budget airlines have nearly quadrupled their combined share of the domestic market in recent years, but they may soon find themselves jostling for space in both the skies and domestic market as a handful of regional rivals are clamoring to poach their passengers.

According to industry sources, several Japanese, Chinese and Thai budget carriers are gearing up to enter Korea. A low-cost carrier founded by ANA and Japan Airlines is scheduled to launch services here this year, as is Spring Airlines, China’s first private budget carrier.

Demand is picking up for short-haul flights in the region as increasingly affluent and passport-bearing Chinese flock to Korea in ever-greater numbers. Meanwhile, passenger traffic to Japan has recovered to pre-earthquake levels after a tsunami in Fukushima caused mammoth disruptions to the neighboring country last March.

“In line with international trends, there are an increasing number of fliers who don’t mind sacrificing service to save money,” said an official at the Ministry of Land, Transport and Maritime Affairs. “The market for low-cost carriers in Europe and North America is already saturated, but that for East Asia is still in an embryonic stage.”


Peach debuts in May

The Osaka-based Peach Aviation, of which Japan’s ANA is a major shareholder, will be the first foreign low-cost carrier to come knocking on Korea’s door this year. It intends to launch daily flights between Incheon and Osaka from May 8 as its first international route.

The airline said it has benchmarked Ireland’s Ryanair, the biggest budget airline in Europe, and plans to begin offering cheap flight tickets by eliminating “unnecessary” services.

He said the airline has not made any decision on air fares yet, but that they will be in the same neighborhood as Peach Aviation’s fares in Japan.

The carrier sent shock waves through Japan’s airline industry by announcing that it plans to launch its first domestic flights there in March with fares equivalent to one third of those offered by its parent ANA.

“Considering that Sapporo, Fukuoka and Incheon are all of a similar distance from Osaka, the fares that will be levied on Korean passengers are expected to be in a similar range,” Kim said. 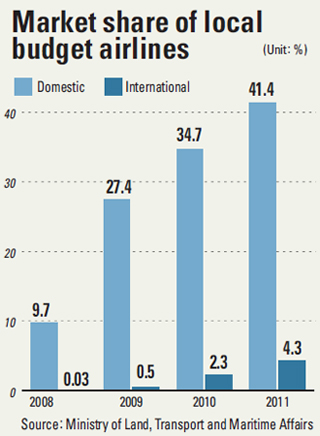 AirAsia Japan, a joint venture of ANA and Malaysia-based AirAsia, is expected to initiate services from Incheon and Busan to Narita in October. Capitalizing on the rich experience of AirAsia, the region’s biggest budget airline, it is likely to become a formidable competitor.

However, Korea’s low-cost carriers are not just sitting idly by and waiting to lose their respective market shares. Instead, they are also increasing flights to Japan and China.

Jeju Air, the country’s leading discount airline, is scheduled to launch flights from Incheon to both Nagoya and Fukuoka in March, while Air Busan, a subsidiary of Asiana Airlines, intends to start service between Busan and Qingdao in China’s Shandong Province.

Additionally, local player Eastar Jet will run two flights a day between Incheon and Osaka from March 30, putting it in direct competition with Peach Aviation. Jin Air and T’way Air are also strengthening their flight services in Northeast Asia.

But the growing competition is causing some consternation as a couple of domestic low-cost airlines, specifically Eastar Jet and T’way Air, are in heavy debt and are rumored to be mulling putting themselves up for sale.

Their woes have been exacerbated recently by rising oil prices, and a glut of cheap airlines clogging up short-haul routes could be the final nail in the coffin for players that are already performing badly. 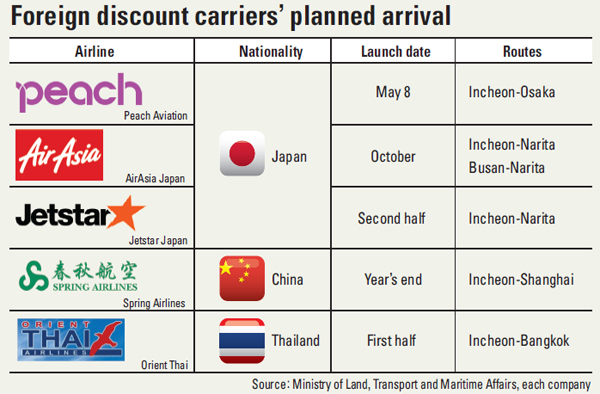 Industry observers say that Japanese and Chinese budget airlines are going to concentrate in the future on routes between large metropolitan cities such as Shanghai and Osaka, meaning that Korean low-cost carriers may have to lower their prices to remain attractive.

“We are certainly worried,” said a spokesman for one of the domestic budget airlines, who declined to be named.

“Our Japanese rivals are backed by their parent companies, but we are not. We previously had high expectations of our international routes, but we can’t keep competing on price. As the foreign airlines have not announced their strategies yet, we are still in the process of compiling information and monitoring developments.”

Others were more optimistic. “We’re not that worried,” said Song Kyung-hoon, a spokesman for Jeju Air, adding that he sees this as a golden opportunity for the lower end of the industry to blossom.

“Korea’s budget airlines have already entered the Japanese market, so now it is their turn to come here. Sooner or later, low-cost carriers, not regular airlines, are going to lead the aviation market.”