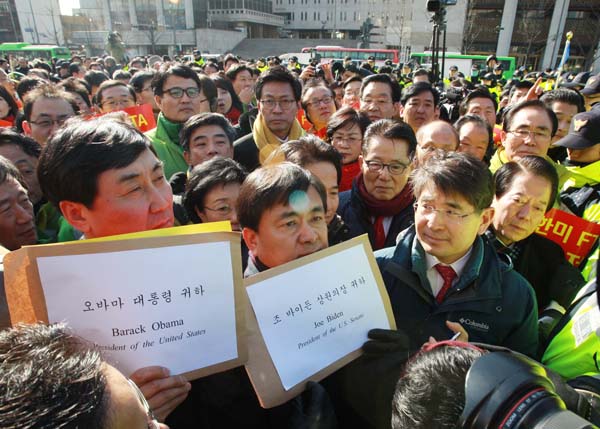 Leaders of the opposition Democratic United Party and the Unified Progressive Party try to walk to the U.S. Embassy in Seoul yesterday to deliver a letter to U.S. President Barack Obama demanding FTA renegotiations. By Kim Hyung-soo

Opposition parties yesterday reignited the controversy over the Korea-U.S. free trade agreement, formally demanding U.S. President Barack Obama renegotiate some of the terms they consider unfair - with a threat to scrap it if they win December’s presidential election. 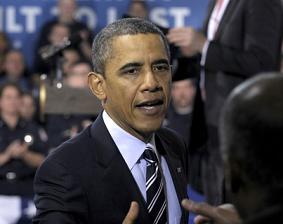 Calling the Korea-U.S. FTA unfair, the letter was signed by all 96 lawmakers of the two parties.

“If we win the December presidential election and if our demands for renegotiations are not met by that time, the Korea-U.S. FTA will be terminated by Clause 2, Article 24.5 of the agreement,” the letter read.

The parties tried to deliver the letter and two other copies - one addressed to Vice President Joe Biden, president of the U.S. Senate, and another to Speaker of the House John Boehner - to the U.S. Embassy after the press conference outside the Sejong Center for the Performing Arts in central Seoul.

As the groups tried to march toward the embassy, a brief scuffle took place with the police.

“If the U.S. government ignores our demand, we will do everything to scrap the FTA when we become the majority after the legislative elections,” the letter read.

“This humiliating, unpatriotic deal is impoverishing our people,” DUP Chairwoman Han Myeong-sook said at the press conference. “The letters represent the views of not only 96 representatives, but of 99 percent of working-class Koreans.”

The Korea-U.S. free trade agreement, concluded in 2007 and renegotiated with Washington in 2010, was finally ratified by the National Assembly on Nov. 22, 2011, after the ruling party blindsided opposition lawmakers with a surprise floor vote.

An opposition lawmaker set off a tear gas canister in the legislature in a vain attempt to stop its passage.

In the letters, the opposition parties listed 10 points they want renegotiated, including the removal of an investor-state dispute settlement provision.

The DUP demanded products from the Kaesong Industrial Complex in the North be considered South Korean products. The party also wants safeguards for financial institutions and auto industries to be bolstered.

Earlier in the morning, DUP Chairwoman Han Myeong-sook said if the “toxic clauses” weren’t renegotiated, “We will scrap the FTA by using the authority of the new administration after winning the legislative and presidential elections.”

Han attacked the Lee Myung-bak administration for having renegotiated the deal for the worse. She said Koreans are angry about the Lee administration’s additional negotiations because the principle of fairness was violated.

“We want the government to stop all other FTA negotiations right now,” said Representative Park Jie-won, a member of the DUP Supreme Council. “I propose that the government conduct a review on the impact of the FTA provisions currently in effect and then decide whether it will go ahead with additional FTAs or not.”

Park said the government has or is negotiating FTAs with 81 countries around the world.

The liberals’ strategy resembles the presidential campaign of 1997, when candidates, including Kim Dae-jung, pledged they would renegotiate the terms of a bailout agreement with the International Monetary Fund.

At the time, the IMF forced three candidates, including Kim, to sign agreements that they would follow through with the arrangement should one of them become the president. Kim won the election.

“Sending letters to the U.S. president and congressional leaders is a serious diplomatic discourtesy,” said Representative Lee Ju-young, chief policy maker of the Saenuri Party, at a press conference.

Calling their demands politically motivated, Lee said there was no precedent of the Korean government unilaterally terminating a legitimate treaty.

“The demand to scrap the Korea-U.S. FTA is an anachronistic idea,” Lee said. “We are seriously worried that it would damage the Korea-U.S. alliance and ruin Korea’s standing in the international community.”

Lee also reminded the liberals that the free trade deal with the United States was first initiated by President Roh Moo-hyun, a liberal, and Han promoted it when she served in the Roh government as prime minister.

“Denying the key policy of a liberal administration to attract votes is a clear admission that the liberals are irresponsible political forces,” Lee said. “They are bringing distrust upon themselves.”

According to DUP sources, the letter addressed to the U.S. leaders was drafted by Nam Hee-sob, a patent lawyer who served as an advisor to the DUP’s committee against the FTA and the Korea Alliance Against the Korea-U.S. FTA, a coalition of about 300 civic groups.

Sources from the two parties said the idea of sending the letter to Obama first originated from the civic groups’ alliance.

An aide to Representative Chung Dong-young, who heads the DUP’s committee against the FTA, said the alliance presented the idea and the two parties reviewed it and agreed.

While the committee led the effort in the DUP, Representative Lee Jung-hee, head of the Unified Progressive Party, led the initiative in her party, the source said.