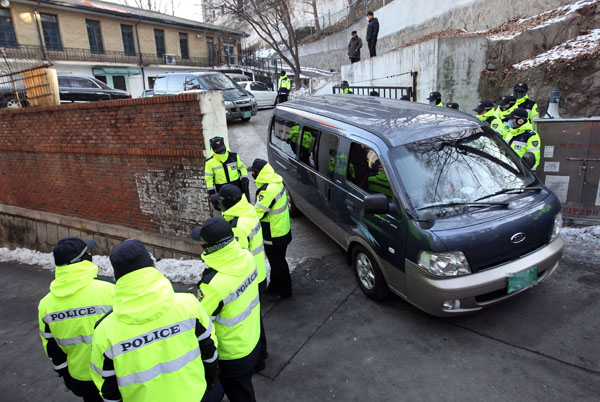 The National Intelligence Service (NIS) van leaves the Seoul office of the Solidarity for Peace and Reunification of Korea, a left-leaning pro-reunification civic group in Seodaemun District, western Seoul, yesterday after raiding the office to seize all relevant documents concerning the alleged violation of the National Security Act. Five more offices in other regions were also raided. According to the NIS, the group, which was established in 1994, has been involved in numerous pro-reunification actions. Recently, however, they have come under official investigation as executive members are under suspicions of producing and distributing leaflets that are considered an act benefiting North Korea, and also being involved in a spy case concerning an underground spy ring called Wangjaesan. [YONHAP]