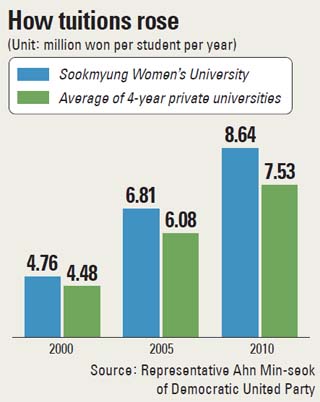 The Sookmyung Women’s University’s Foundation cooked its books for more than a decade, moving money between accounts to make its finances look better on paper.

According to account slips of the university obtained by the JoongAng Ilbo, the university received a total of 68.5 billion won ($61.4 million) of donations to the school between 1995 and 2009, but transferred them from the donation account to the foundation’s own account to get a good rating during the government’s evaluation of university foundations.

In Korea, the foundation that owns and operates a private university has its own budget, from which it transfers money to the university budget for operations. The donations budget is a separate one under the university.

“The foundation made it look as if they gave money from their budget to us,” a university official said. “However, in fact, they didn’t give a penny to the university.” 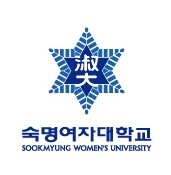 The account slips show that donations to Sookmyung Women’s University were immediately transferred to the account of the Sookmyung Foundation.

In 1994, the government launched a comprehensive evaluation of universities nationwide, and one of the standards was the financial health of university foundations.

According to the account slips, the shifting around of the money has been going on since 1995, when Lee Kyung-sook, who currently chairs the Korea Student Aid Foundation, became president.

“As far as I know, the foundation didn’t have any money to give to the university,” the university official said. “So they started to commit the illegal account juggling.”

The juggling apparently continued until 2009, when the current president, Han Young-sil, ordered it stopped.

The Sookmyung Foundation didn’t pay for its faculty’s health insurance fees or pensions until last year, which totaled 24.4 billion won from 1998 until now.

Instead, the foundation had the university pay them, which isn’t illegal under the Private School Teachers and Staff Pension Act. But if the foundation has no budget of its own, as was allegedly the case, it could be shut down under the law.

As a result, the university paid the pensions and insurance fees from tuition revenues.

This put a squeeze on its finances, and it was forced to double its tuition over the last decade from 4.76 million won per year to 8.64 million won.

The school’s dependence on tuition for its budget increased from 52.1 percent in 2000 to 65.8 percent in 2010, according to Ahn Min-seok, a member of the National Assembly’s Education, Science and Technology Committee.

In 2009, faculty at the university demanded the foundation stop the donation-laundering, but the foundation’s board passed a regulation prohibiting a mass protest by faculty in June 2011.

According to a transcript provided by the university of a dialogue in July 2011 between the faculty and the foundation, the board chairman, Lee Yong-the, appeared determined to continue the money laundering. Lee has been the chairman of the foundation since 1998.

“We can solve our problems by giving the donation fund to the foundation and then passing it to the university,” Lee said.

The transcript was leaked to students, and student council members issued a statement in January demanding the foundation be held accountable for poor management.

Unlike universities supported by religious groups or corporations, Sookmyung Women’s University was founded in 1906 as a school for royal families and aristocrats, and it doesn’t have a powerful sponsor.

Most of the seven board members of the foundation are close friends or associates of the chairman.