Trying to keep up, online shoppers taken for a ride

Trying to keep up, online shoppers taken for a ride

Discouraged by the puffed-up prices of padded jackets from the North Face, the best selling outdoor brand in Korea at the moment, and footwear from Nike, a popular sportswear import brand, more shoppers have turned to Internet sites for discount prices.

But cheaper purchases online come with at a price, as an increasing number of these shoppers don’t receive the items that they ordered. 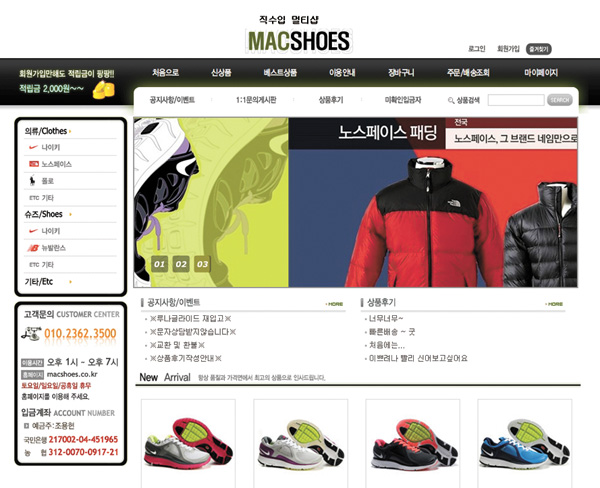 A screen capture of the Web site of Mac Shoes, one of the sites in question.

Last December, a man surnamed Park purchased two North Face down jackets for himself and his girlfriend on a Korean Internet shopping site called “The North Face Down Mall” for 630,000 won ($565) for the pair, a reasonable price since most down jackets are usually priced between 250,000 won to 700,000 won at retail stores, and the brand’s bestselling men’s jackets in Korea are in the 500,000 range.

He was told by the shopping site, “Because the item is shipped from abroad, delivery will take two weeks.” But after three weeks the items did not show up. He called the company several times regarding delivery, but after a while, contact was completely stopped. Park never received the jackets.

Similarly, another shopper purchased two pairs of Nike sneakers for 150,000 won, which is about two for the price of one compared to average retail prices of Nike running shoes, on another Internet shopping site called “Toto Shoes.” But the sneakers were never delivered. When Lee queried their customer service regarding his order, at first they were friendly, but after a month, he could no longer reach them.

The Seoul government revealed on Tuesday that through their Seoul Electronic Commerce Center (SECC) Web site, they had received 410 reports last month from consumers who had purchased apparel and footwear through Internet shopping and did not receive their orders.

According to the SECC, 364 cases dealt with footwear and 46 cases apparel, and most of them were for the North Face jackets and Nike sneakers, particularly popular among young people.

Middle and high school students wear the North Face down jackets, despite their hefty price tags, like uniforms and also as status symbols in schools - the higher-priced jackets being more coveted.

The highest number of cases reported came from those who had purchased from “Mac Shoes” (macshoes.co.kr) to order their items, with 220 cases reported to the Seoul Electronic Commerce Center, followed by 173 reported cases from those who had used “Toto Shoes” (www.totoshoes.co.kr). The other two sites reported were The North Face Down Mall with four cases, and NA Shopping with 13 cases. These sites had fake business registration numbers and business locations. The North Face Down Mall operated through servers in China.

These scammers target youths through Internet stores that offer various apparel, especially those that are sold out in stores, at discounted prices that are sometimes more than half off. After receiving up-front payments, they blame the slow delivery time of the items on being shipped from abroad, then they quietly disappear.

The majority of those scammed were in their 20s, with 233 cases; and 17.6 percent, or 72 cases, of scams reported were from teenagers.

Park Sang-young, a Seoul Metropolitan Government official, stated, “You should be suspicious of advertisements of ridiculously cheap prices for products difficult to purchase on the market.”