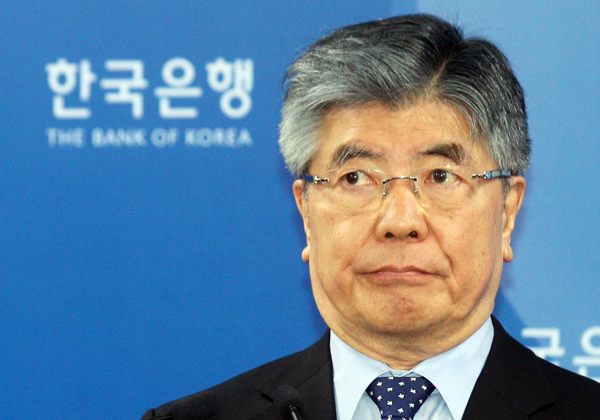 
The issue of the Bank of Korea’s role and independence under governor Kim Choong-soo was once again raised this week as the nation’s key rate was frozen at 3.25 percent for the eighth consecutive month amid mounting inflationary pressure.

The central bank cited downward risks resulting from uncertainties in external conditions for its decision to maintain its current monetary policy.

This comes as Korean exports, a chief growth engine, shrank recently for the first time in two years, while industrial production also fell.

The problem is that, in order to stimulate the economy, the BOK would have to loosen its monetary policy and increase the available amount of liquidity, but doing so would further raise the already burdensome rate of inflation.

Although consumer prices last month grew at a slower pace of 3 percent compared to the roughly 4 percent growth rate posted in November and December, there are concerns that they could spike this month due to the unusually cold weather. U.S.-led sanctions on Iranian oil are also likely to have a negative impact.

However, the central bank’s decision yesterday came as no surprise as the market, including foreign institutions such as Goldman & Sachs and Moody’s, speculated earlier this month that there would be no change made.

While Goldman & Sachs expects the bank to keep the rate frozen throughout 2011, Moody’s believes it will eventually feel compelled to loosen it.

“The case for a rate cut is growing and it will now only be a matter of time before the Bank of Korea loosens policy,” said Glenn Levine, a senior economist at Moody’s.

He said that even though the global economic outlook has improved in recent weeks, Korea’s near-term growth remains weak and production will slow to a crawl in the first half of this year.

“We expect the central bank to leave rates on hold at their next couple of meetings, but they’ll have to cut soon after, as the case for easier settings become irresistible,” Levine said. “We expect two small rate cuts in the second quarter.”

Market observers say the central bank’s failure to achieve its primary goal of taming inflation is largely due to the governor’s close ties to President Lee Myung-bak.

Although it has tightened its monetary policy rate from an historic low of 2 percent to 3.25 percent since 2010, the bank’s move was still considered conservative and in compliance with the central government’s aim of sustaining momentum for economic recovery.

Moreover the central bank under Kim has made an unusual move to cooperate with the Ministry of Strategy and Finance on assessing and monitoring macroeconomic issues in a monthly meeting.

A BOK employee said due to the monthly macroeconomic meeting the employees are now overworked.

“Now the central bank has created a situation on its own where it gave little thought to lowering the borrowing rate out of fear of another boost in consumer prices.”

However, the governor stressed yesterday that the role of central banks across the world is no longer limited to taming inflation but has widened to providing financial stability.

“One of the central bank’s main goals is to stabilize consumer prices, but after experiencing the [global] financial crisis, stabilizing the financial market has become an important project,” Kim said.

This is not the first time the BOK has been criticized for failing to take preemptive steps to tame inflation by making decisions at odds with the central government. But governor Kim still considers what the public thinks a failure of the central bank’s policy decision on consumer prices, he considers as a lack of communication.