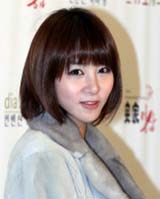 Actress Kim Jung-min has asked police to track down the person who posted a pornographic video online and claimed that she appears in the video.

Gangseo Police in Seoul said yesterday that they have started an investigation into the video, which is currently making its rounds on the Internet.

“Kim submitted a petition Wednesday, and we are currently in the process of examining the evidence and trying to track down the person behind the video,” a Gangseo Police official said.

The same day, Kim defended herself on Twitter by uploading a video with the same title as the one in question, “Kim Jung-min films herself in a one-room.”

Kim wrote, “I’ve never taken part in such activities. I saw the clip myself and can confirm that it’s not me. This is the hardest time I’ve ever faced in my career.” She said that although this isn’t the first time that she has been publicly humiliated, she needs to clarify the matter because her dignity as a woman is at stake.

Kim made her debut in 2003 in the teen drama “Sharp.” By Carla Sunwoo