A cook who’s always ahead of the culinary curve

A cook who’s always ahead of the culinary curve 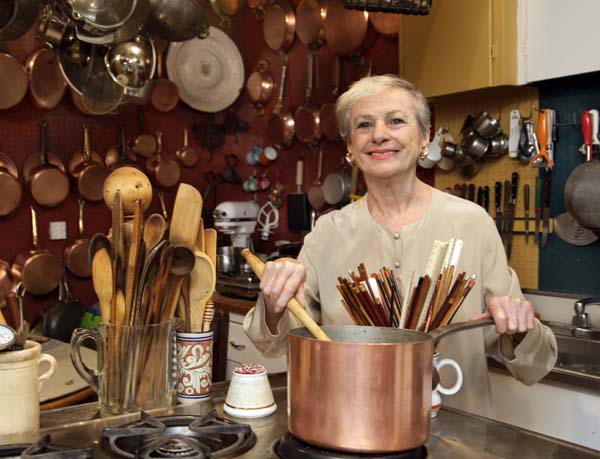 For more than 30 years, Barbara Kafka has been telling people - in no uncertain terms - how to cook in the moment.

In every book, in every appearance, she urged American home cooks to be bold, fearless and confident. Even more, she championed trends. Not the ones that made food fashionable. The ones that made it healthier, better tasting and easier.

“She helped create, but also translate, trends in food for everyone at home,” says the Beard Foundation’s executive vice president Mitchell Davis, referencing “Microwave Gourmet,” Kafka’s 1987 book that got Americans cooking everything from risotto to pudding in their microwaves. “She managed to speak to a lot of people about how to make really good food, how to make it simple, but without compromising in any way.”

Along the way, Kafka wrote six cookbooks, all award winners or bestsellers, and in 2007 she won the James Beard Foundation’s Lifetime Achievement award. She taught cooking with Beard himself, collaborated with Jacques Pepin, won the respect of Juila Child.

Now Kafka’s seventh book, “The Intolerant Gourmet,” makes her a pioneer again, propelling the 78-year-old into the gluten- and lactose-free territory usually dominated by 20- and 30-something bloggers and tweeters.

It was a world she entered out of necessity. After years of dormancy, childhood food sensitivities to dairy and gluten (a wheat protein) resurfaced and forced her to rethink the way she ate.

While many books in this genre take the substitution approach - “Here’s what I want to eat, how can I make it?” - Kafka did the opposite: She set out to make delicious foods that just happen to live within new parameters.

The result? Dishes like mussels with hen-of-the-woods mushrooms, West Indian curried hash, and tandoori chicken, foods that few would consider a hardship.

“She gives weight to these niches,” says Corby Kummer, a senior editor at The Atlantic magazine and a longtime friend of Kafka’s who pushed her to write the latest book after his stepdaughter was diagnosed as gluten-intolerant. “She carves out territory and then other people follow in her wake. No matter how many books come and go, hers are there.”

Kafka was an unlikely cook. Born into a wealthy New York family, her father was in the perfume business, her mother was a well-known New Deal lawyer who had been among the first women to graduate from New York University’s law school. Lillian Louise Poses - Kafka’s mother - did not cook. Ever.

“It was almost irreligious for her, at that point in life, to cook,” Kafka says. “I don’t think she ever wanted to be in that niche of a woman.”

Kafka trained her palate in places like Le Pavillon and Louis Diat’s Ritz-Carlton, the legendary New York dining rooms her father would whisk her to when her mother was working. But she learned to handle a stove on her own, watching the family cook, a black woman named Rachel Wellman who’d been raised by the Salvation Army in Canada.

Despite its obvious appeal as an avenue of rebellion against her “poor mother,” Kafka says, cooking was not her life’s ambition. She wanted to be a poet. “It was more something that people would hire me to do,” she says. “I wanted to be a writer. So I did it.”

But surely cooking satisfied her creative instincts? “No,” she snaps. “Food is not high art.”

Not art? Not even the liquid popcorn and mock oysters of avant-garde cuisine, not even the carrot air and slinky-shaped olive oil candy of its creator Ferran Adria?

“I dislike him intensely,” she says of the Spanish chef behind the now-closed restaurant elBulli. “It’s not about the reality of food, which is gutsy and earthy and stomach-featured.”

But he needn’t have been. In these days when so much in the food world is precious, so much overblown, Kafka remains practical to her core. She’s your no-nonsense grandmother.

“She’s our conscience,” says the Beard Foundation’s Davis. He recalls a remark she made to him years ago, when he was just staring out. “I was a young and eager food person and she said, ‘You know, honey, you didn’t invent food. It wasn’t invented today.’ She was right. It’s really good to have that link because we so easily forget.”

Kafka’s dislike of Adria and his modernist ilk seems less tied to their food than to what that food represents. Kafka says the era of high-tech presentations, celebrity chefs and cooking as reality TV has disenfranchised the people who should be cooking: Home cooks.

“They think they’re inadequate,” she says, “which isn’t true. It’s really very simple. One just has to relax and do it.” AP