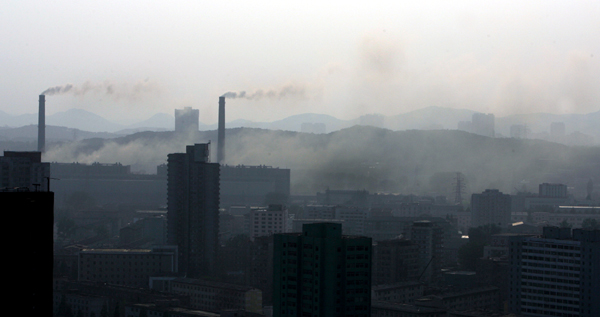 Posco Power is struggling to meet the government’s renewable energy quota, and it is not alone. 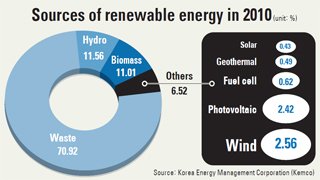 The nation’s largest private power company recently finished installing 2-megawatt photovoltaic panels on an old salt field in Sinan County, South Jeolla. The solar-powered panels will produce 2,600 megawatts of electricity a year for around 800 households in the region, but even this is not enough for it to meet the overall target and escape some kind of financial punishment. 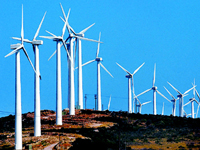 “We will be able to meet the government’s requirement for solar energy by completing these panels in Sinan,” said an official at Posco Power. “But we won’t be hitting the full requirement.”

In fact, no power company in the country will be able to meet the government’s new demands, he added.

Posco Power is one of 13 power companies that will be subject to Seoul’s renewable energy policy from later this month, dubbed the Renewable Portfolio Standard (RPS). Many more will not fall within its net for the next few years.

Under the plan, the companies are required to use renewable forms of energy, including solar, wind, fuel cell and geothermal power for 2 percent of their total production volume

If the companies fail to meet the requirement, they must purchase renewable energy certificates (RECs) proving that they have at least tried to produce power using renewable energy production facilities. Otherwise, they will be penalized.

“Many power generators will face hefty fines for failing to meet the requirement,” said an industrial official. The amount of the fine will be about 150 percent of the price of an REC, according to the Korea Energy Management Corporation (Kemco).

The certificates will be available from the end of this month, Kempo said.

Since 2001, Korea has been using a system called Feed in Tariff (FIT) to distribute renewable energy. Under this, the government covers the gaps between production costs for renewable energy and consumer prices of electricity by providing subsidies to the companies.

The current system suits Korean power companies better than the new RPS system, they say, as the latter brings with it a bigger financial burden due to the huge production costs.

With the introduction of the new system, which will fully replace the FIT, the government believes it will be possible to cut spending in this area while also giving the domestic renewable energy sector a boost.

According to Kemco, the global renewable energy market is currently worth 4.1 trillion won ($3.7 billion), but will likely grow to 54 trillion won by 2022.

Nine Organization for Economic Cooperation and Development (OECD) members adopted the RPS system roughly a decade ago, including the U.S, UK, Italy and Sweden, while the remaining 20 countries still use the FIT.

Since last year, many of the nation’s power companies have been rushing to install photovoltaic panels, mostly on the rooftops of large factories, in order to comply with the government’s RPS rules. But they are concerned they will not make the deadline as they have been unable able to build enough facilities to fill the quota so far.

According to industrial sources, most of the companies can barely fill one-tenth of the required 2 percent.

The five subsidiaries of Kepco alone need to be able to produce a combined 1.8 million kilowatts of green energy a year ? equivalent to the amount of energy pumped out by two nuclear power plants. At present they have managed to secure about one-fifth of this, according to industry insiders.

One reason why the companies are having difficulties expanding their facilities is the opposition they are meeting from nearby residential areas.

A backlash from local residents concerned by the prospect of environmental destruction has prevented Korea Midland Power (Komipo) from embarking on building a tidal power plant on Ganghwa Island off the western seaport of Incheon since 2006. Another sticking point is that the power companies would have to shoulder a financial burden that currently rests on the government’s shoulders.

As electricity produced from renewable energy is pricier than that derived from cheap fossil fuels or coal, consumers are less likely to go for it - a risk that could not only harm profits but put the companies in debt.

Market observers expect the RPS issue will likely boil down to a competition among the power companies to see who can buy the RECs first as a demonstration of good intent to avoid being slapped with fines by the government, as the 2 percent requirement may prove an impossible target.

Meanwhile, the government has a separate set of requirements for solar energy, with the aim of revitalizing the stagnant market. The power companies have to pay special attention to photovoltaic energy as the government intends to expand the market for the next five years.