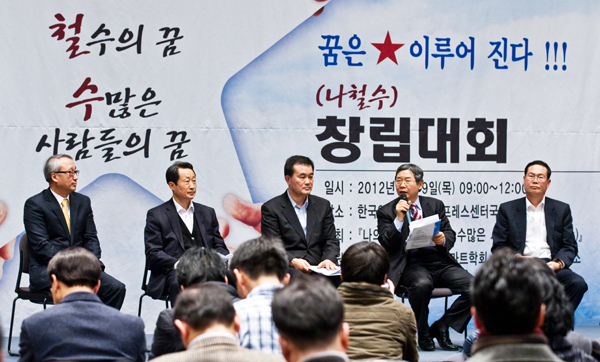 About 1,000 supporters of software mogul Ahn Cheol-soo yesterday launched a fan club at the Korea Press Center in central Seoul to encourage him to run for president. Ahn is keeping a distance from the club. By Kim Seong-ryong


About 1,000 supporters of software mogul Ahn Cheol-soo yesterday launched a fan club to encourage him to run for president in December, although Ahn is keeping his distance from the club.

The club’s name, Na-Cheol-soo, is an abbreviation of the Korean phrase “My dream, Cheol-soo’s dream and many people’s dream.” Jeong Hae-hun, a representative of the club, said the name was intended to mimic the name of popular liberal podcast “Naneun Ggomsuda” (I’m a Petty-minded Creep), often abbreviated to “Na-ggom-su, and the television program “Na-ga-su” (I’m a Singer). 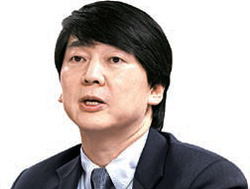 At the launch ceremony at the Press Center, central Seoul, Jeong said he has close ties with Ahn.

“I met with Ahn on Jan. 3 and he asked me how he should move forward in his political career,” Jeong said. “So I advised him to consolidate his position and become more active.”

Asked whether Ahn would run in December’s presidential election, Jeong said, “Why did Ahn travel across the country to hold 27 Youth Concerts and launch a charity foundation? I think we already have the answer [about his political career].”

Ahn, founder of Ahnlab software company and dean of Seoul National University’s Graduate School of Convergence Science and Technology, became a political hopeful after co-hosting a nationwide series of lectures on current events called Youth Concerts, which were highly popular with young people. He was rumored to be interested in running in October’s by-election for the mayor of Seoul, but instead supported independent candidate Park Won-soon, who won the race. Liberals think he would be a galvanizing candidate for president.

According to Jeong, a former KBS reporter and the chairman of a civic group, high-profile figures were appointed co-representatives of the club, such as Jung Chang-duk, a computer science professor at Korea University; Ko Jong-moon, former president of the Korea Housing Management Co.; and Lee Jang-hie, a law school professor at Hankuk University of Foreign Studies.

Jeong said the club will rally supporters of Ahn, recruit volunteers and set up a research institute to study Ahn’s vision and policies.

However, Kang In-cheol, a lawyer and an aide to Ahn, issued a press release Wednesday saying Ahn and his newly established charity has nothing to do with the club. It advised the public to not be misled by the club and warned it not to speak for Ahn.

“An official from the club visited Kang’s office and simply gave notice about the group’s launch,” another Ahn aide said. “Kang warned him that it must be held legally accountable if there are any problems, but the group didn’t care.”