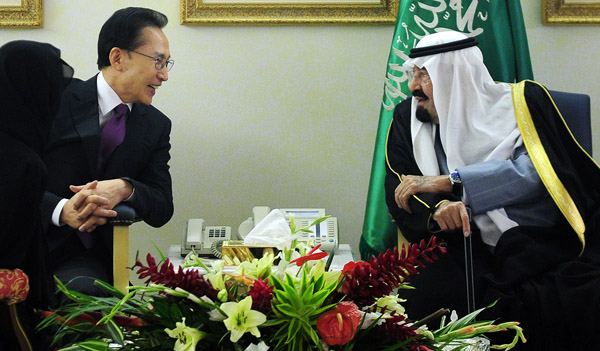 “It is necessary to expand cooperation in various sectors between South Korea and Saudi Arabia. In particular, I hope more attention will be paid on projects for the Saudi people,” Lee said during the summit, according to the presidential office.

King Abdullah responded that cooperation between the two countries has already gone well, but he will make sure to strengthen cooperation further, the office said in a statement.

In particular, the health ministries of the two countries signed a health-care and medical cooperation agreement with the two leaders in attendance. The agreement calls for exchanges in medical information and experts and other joint projects.

Earlier in the day, Lee held talks with Saudi Defense Minister Salman bin Abdulaziz Al Saud and agreed to significantly bolster their defense cooperation to elevate relations in non-economic sectors to match those of their prospering business ties. Specifically, officials of both countries agreed to conclude a defense cooperation pact at an early date, possibly in the first half of the year, and establish a military attache at the Saudi Embassy in Seoul, who will be the country’s first in the Far East.

A defense cooperation pact could be signed if and when the minister visits Seoul, said senior presidential press secretary Choe Geum-nak. If Salman is unable to pay a visit, Korea’s defense minister, Kim Kwan-jin, will visit Riyadh for talks, the official said.

“The focus of this visit is to lift cooperation in noneconomic areas to the level of the economic sector,” Choe said. “What is important is that the two sides agreed to elevate defense cooperation as well to match such a level.”

Choe declined to offer specifics on cooperation in the defense industry but sources said the two sides have been in talks on weapons projects, such as exporting ammunition and howitzers to the Middle Eastern nation.

On Tuesday, Lee held talks with Saudi’s oil minister, Ali al-Naimi, and won assurances that the country will provide Korea with as much crude oil as needed as Seoul prepares to cut back on imports from Iran in line with U.S. sanctions.

The commitment is expected to alleviate concerns in Korea that a drastic cut in oil imports from Iran, which is accused of seeking illicit nuclear programs, could harm the slowing economy.

Officials said the invitation shows how much importance Riyadh attaches to ties with Seoul.

The housing minister agreed to visit Seoul in the near future for talks on the project.

As part of the project, Saudi Arabia has already asked Korea to take part in a pilot 10,000-home construction project, and talks are under way after a consortium of Korean builders turned in their proposal to the Saudi government, the official said. Yonhap