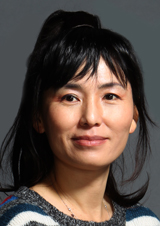 When former Democratic Party lawmaker Chung Bong-ju, who is now in jail, sent a letter apologizing for his friends’ remarks that praised a bikini-clad female protester’s photo, the fight between macho liberals and feminists over the risque demonstrations seemed to be reconciled.

However, renowned novelist and feminist Gong Ji-young said Wednesday night that she will deactivate her Twitter account, hurt by Chung’s supporters who flooded the account with tweets condemning her.

“I didn’t imagine at all that I would come under fire from Chung’s supporters,” Gong said.

“Reading comments on my Twitter, I definitely felt how celebrities could think of committing suicide [due to netizen hostility].”

Gong tweeted on Wednesday afternoon that she had visited Chung in jail in South Chungcheong and Chung told her that he sent a letter of apology to three online communities of liberal women and feminists.

The community members recently demanded that the three hosts of the popular liberal podcast “Naneun Ggomsuda” (I’m a Petty-Minded Creep) apologize for praising a female supporter of Chung, who posted a photo of herself in a bikini protesting his imprisonment.

The members said that the liberal hosts sexually harassed their fans and listeners of the show with their lewd remarks in support of the bikini protester.

Gong also demanded the apology as a feminist although she is a close friend of the podcast hosts.

In the midst of the deadlock between feminists and the hosts, Gong tweeted on Wednesday: “Chung said he sent a letter to the three communities, apologizing on behalf of the three hosts. In the letter, he said he asked for generosity to the community members.

“He showed the attitude of a broad-minded person who understands the sensitivities of other people. I would appreciate if the communities made the content of the letter public.”

However, some aggressive supporters of Chung attacked Gong, saying things like “Now are you satisfied with an apology from the person in jail?”