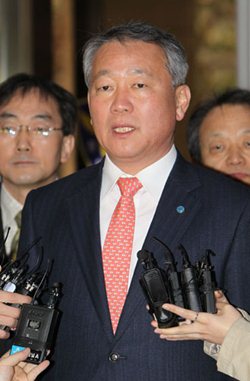 Ahn Yang-ok, president of the Korea Federation of Teachers’ Association. By Kim Do-hoon

School bullying continues to be a deadly problem, and authorities are looking for ways to increase the level of responsibility for those in daily contact with the students. But teachers are concerned all the blame could be placed on them.

As prosecutors and police have begun putting pressure on teachers who allegedly neglected their duties by not taking appropriate action to stop school violence, Ahn Yang-ok, president of the Korea Federation of Teachers’ Association visited the Seoul Metropolitan Police Agency and the National Police Agency, both in central Seoul, yesterday, in protest.

According to the KFTA, Ahn told the prosecutors and police that “it is inappropriate to focus attention on teachers’ duties concerning school violence when it should instead focus on verifying the government’s countermeasures against school violence that were announced on Monday.” 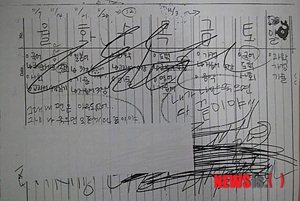 He added that “applying such a standard to teachers’ duties will only constrain teachers who will be tasked with ending school violence.”

The Seoul Southern District Prosecutors’ Office ordered Yangcheon Police Precinct in western Seoul, yesterday, to conduct a corroborative investigation to look closely into how a teacher, surnamed Ahn, 40, dealt with school violence among his students.

Peer bullying contributed to a 13-year-old student surnamed Kim taking her own life in November of last year, and whether or not Ahn should be punished on charges of dereliction of duty has stirred up controversy.

Yangcheon Police has been investigating since Tuesday suspicions that Ahn did not take proper action to stop continued violence against Kim.

According to the police, Ahn can be charged with dereliction of duty under the law concerning prevention and countermeasures against school violence, which states that a “teacher must report to the principal and the school upon being informed of school violence.”

Police said that “Ahn failed to document the case despite being aware of the bullying, nor took any measures.”

However, legal experts predict that it would not be easy to punish Ahn as this case can’t be established unless there’s proof of Ahn neglecting his duty. In other words, the police needs to show that Ahn neglected the constant bullying against Kim despite being fully aware that Kim was going to be driven to commit suicide, according to a legal expert.

If Ahn testifies that he didn’t know that the bullying was so severe that it would lead Kim to end her own life, it will be difficult to establish this as a criminal case.