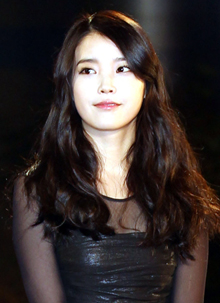 The entertainer, often described as the “nation’s younger sister,” attended the graduation ceremony at Dongduk Girls’ High School on Thursday in Bangbae-dong in Seocho District, Seoul.

Despite speculation that she would not attend the event, the 18-year old vocalist was there to celebrate. During the event, the celebrity was like any other student, wishing friends well and posing with classmates.

The singer, whose real name is Lee Ji-eun, was described by her homeroom teacher Lim Sung-woo as a sociable student who had a lot of friends.
“She was a good student and got along well with her classmates. Ji-eun said that she wanted to pursue further studies the last time we talked,” Lim told local media. But when IU announced that she would pursue her singing career instead of her studies, the teacher said she was disappointed.

“I really hope that next year she will consider going to university,” the teacher said.
The teacher concluded by saying she is proud of IU and looks forward to seeing her represent Korea.

IU was among several entertainers who graduated on the day, including actors Yoo Seung-ho and Lee Hyun-woo and Yoon Bo-mi from girl group A Pink.