Pressure not a problem for ‘Wandeugi’ writer

Pressure not a problem for ‘Wandeugi’ writer 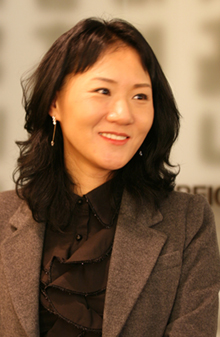 Bestselling author Kim Ryeo-ryeong transports readers to another time and place with her new book, “Gasi Gobaek,” which starts with a teenage boy’s confession of theft.

It might be tempting to think that Kim, whose previous novel “Wandeugi” (2008), which sold more than 600,000 copies and was later made into a film, was under pressure to write another best seller, but at a press conference for the new book earlier this week, Kim said she was shielded from pressure with her belief in fate.

“I think that each book has its own fate,” Kim said.

“Gasi Gobaek,” which was two years in the making, follows the life of Hae-il, a teenager who has been a thief since he was 7. He lives with the knowledge that what he is doing is wrong, but is unable to confess his crimes until he reaches a turning point that prompts him to finally unburden his conscience.

Kim said that Hae-il’s confession is the first step on his path to redemption, and that she was trying to differentiate between Hae-il’s knowledge of his wrongdoing and his desire to share that with another person.

“Confession is different from surrender,” Kim said. “If another person is willing to hear your story, then it is a confession.”

She said she was also interested in the difference between a person’s tendencies and their actions.

“I wanted to show that everyone has a tendency toward a certain kind of action, but the outcome can be different according to which actions one takes,” Kim said.

Kim started writing in her early thirties and within a year of publishing her first novel she had won three major awards, including the Ma Haesong award and the Young Reader Munhakdongne award. The success of “Wandeugi,” which described a multiethnic family in Korea, solidified her position in the literary community.

To create the characters in the book, Kim drew upon her memories of her own teenage years, saying that she has vivid memories of her classmates - both the good students and the troublemakers.

She said she also wrote the book in acknowledgement of how difficult it is to be teenager.

“Adolescence is a time when people go through hard times and are at their most aggressive,” said Kim. “But I hope teenagers know that they do not have to go through the dark tunnel by themselves.”