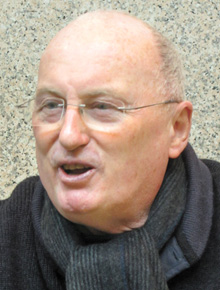 Damien Mugavin, 65, the first non-Korean professor at Seoul National University, will retire at the end of the month, after 10 years at the school.

The Australian professor of landscape architecture at SNU was hired in 2001. While SNU had begun to hire foreign professors in 1999, those hired prior to Mugavin had been ethnically Korean.

Though Mugavin will not officially be retired until the end of the month, he left the country on Feb. 4. A retirement ceremony is planned for him on Feb. 25, though he is not expected to attend.

“But at the beginning of last month, after my last lecture, I held an unofficial retirement ceremony with my students,” he said. “The time with my students was the most joyful.”

Mugavin taught at SNU for seven years, with a hiatus in 2004 when he went back to Singapore to accommodate his children’s education, and returned to SNU in 2009.

“In the 10 years I have stayed in Korea, I have seen the change in SNU students,” he stated. “I was impressed with the students, who were courteous but very bashful and fervently transformed themselves.”

He also remarked on how fascinated he was with how male students would return from their two-year mandatory military service as mature young men.

He said he was impressed with how the students made “efforts to complete an assignment, even staying up all night, which is an aspect that Australian students should emulate.”

But he also said that there are some aspects in which SNU “needs to become more progressive,” referring to how Korean students try to take courses from Korean professors and also how Korean educators sometimes lack consideration for foreign students.

After returning to Australia, Mugavin will become a goodwill ambassador of Korea to Australia. He said he wanted to show Korea’s history, culture and fervor, as demonstrated during the World Cup.

“Though Australians have heard of the big Korean conglomerates, they do not know a lot about Korea,” he said.