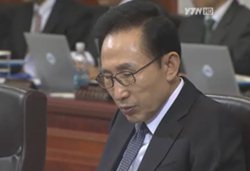 Kim Hyo-jae, Park’s former chief campaign manager, has been denying involvement in the alleged bribery but is likely to be the scandal’s latest victim.

“I am sorry that I caused the public concern,” Blue House spokesman Park Jeong-ha quoted Kim as saying. “I will accept all my political responsibilities.”

President Lee, on a trip to four countries in the Middle East, was briefed on Kim’s will to resign yesterday afternoon, the presidential office said. Lee is known to have made no comment on the matter.

A Blue House official said Kim had expressed a strong will to resign, saying the continuation of his post would increase pressure on the political affairs of the president.

Political sources say President Lee is expected to accept the resignation after returning from his trip today. The scandal - the latest blow to the ruling party - comes months ahead of the April 11 legislative elections.

In January, Representative Koh Seung-duk revealed that he had returned an envelope stuffed with 3 million won ($2,700) in cash and Park’s name card to his office a few days before the GNP chairmanship election in July 2008. Park became the chairman of the ruling party, then the Grand National Party, at the election.

Park has also denied his involvement in the cash-for-votes scandal.

But an aide of Park’s who was suspected of delivering envelopes of cash to legislators for their votes, Goh Myeong-jin, recently confessed to the prosecution that he returned the envelope from Koh to Park’s chief secretary, Jo Jeong-man, and reported it to Kim, indicating that he initially received money from Jo on the order of Kim.

Park’s resignation on Thursday made him the first Assembly speaker to step down over a bribery scandal.

According to Park’s aide yesterday, Park made the decision to resign after he met with Goh a day earlier and heard what Goh had confessed to the prosecution.

Kim became the presidential political secretary in June 2011 after giving up membership in the National Assembly.