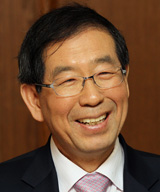 A DUP official said Kim will join the party ahead of a meeting of top party representatives in Changwon, South Gyeongsang. The meeting is slated for Thursday, according to South Gyeongsang Provincial Office.

Kim served as minister of government and home affairs during the Roh Moo-hyun administration. He was elected governor of South Gyeongsang, the home turf of the ruling Saenuri Party, in 2010. 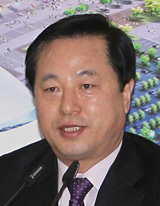 Kim’s aides said yesterday that Park will join the DUP at the same time. The Seoul Metropolitan Government denied the timing, but confirmed the mayor plans to join the party.

“I want to join the party in a way that helps effect political change rather than joining mechanically,” Park, who is in Japan, said in a letter delivered to the DUP yesterday. Park asked the DUP to wait on announcing his membership until the timing is set.

Park, a well-known civic group leader, beat former Saenuri spokeswoman Na Kyung-won in the Seoul mayoral by-election in October. He is known to be discussing his role in integrating the progressive parties before the general election in April.