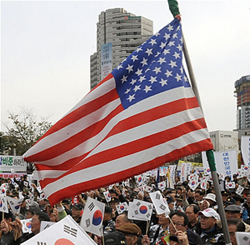 Washington affirmed its commitment to the implementation of the Korea-U.S. free trade agreement on Thursday, reacting to a declaration by Korea’s largest opposition parties formally demanding U.S. President Barack Obama renegotiate terms of the deal they consider unfair.

A U.S. State Department official said the treaty serves the interests of both countries and is a historic opportunity to bolster the economies and the strategic alliance in the Asia-Pacific region, according to Yonhap News Agency.

The Democratic United Party announced early this week that it would nullify the FTA if it seizes power in the upcoming legislative and presidential elections in April and December, respectively.

“If we win the December presidential election and if our demands for renegotiations are not met by that time, the Korea-U.S. FTA will be terminated by Clause 2, Article 24.5 of the agreement,” the letter addressed to the U.S. president and the U.S. Embassy in Seoul read.

An article in the Munhwa Ilbo yesterday quoted Anthony Kim of the Heritage Foundation - a conservative U.S. think tank - as saying that Americans were taken aback by such an unprecedented demand and warned that it could tarnish Korea’s international image and credibility.

Korean diplomatic observers have also expressed concern over the liberal parties’ letter, with some saying the move was a direct expression of hostility toward the United States.

“Visiting the embassy and delivering a letter addressed to the country’s president was an expression of hostility,” said a diplomat who served as a Korean ambassador in the Asia-Pacific region.

According to another official of the Ministry of Foreign Affairs and Trade who is in charge of international treaties, it is very rare for a treaty between two countries to be dropped before taking effect.

“The termination of an important treaty in the international community occurs mostly when a country that was just liberated from colonial rule wants to abrogate the treaties it was forced to follow under the old order, or when a new government is born out of a military coup or a revolution and wants to establish new relations with other countries,” the official said.

“It is also common when two countries develop hostile relations with one another and abolish the former bilateral relations.”

The Agreed Framework, a treaty between the Bill Clinton administration and the North Korean regime in Geneva in 1994, aimed to build two light-water reactors in the North in return for its promise to freeze its chief nuclear site in Yongbyon.

The North, however, was caught attempting to enrich uranium in October of 2002, when the George W. Bush administration suspended its supply of heavy oil to the North. The treaty dissolved in 2003.

So far, South Korea has never abrogated diplomatic treaties that it has made with other countries.

While there is a clause in the Korea-U.S. FTA that permits the nullification of the pact, many diplomats here say it was included in case one of the two countries commits a significant violation of the treaty.

“Having arranged a procedure to abrogate the treaty and declaring the abrogation of the treaty even before it takes effect are totally different things,” said an official of the Foreign Ministry.