Suarez is a disgrace, says Ferguson

Suarez is a disgrace, says Ferguson 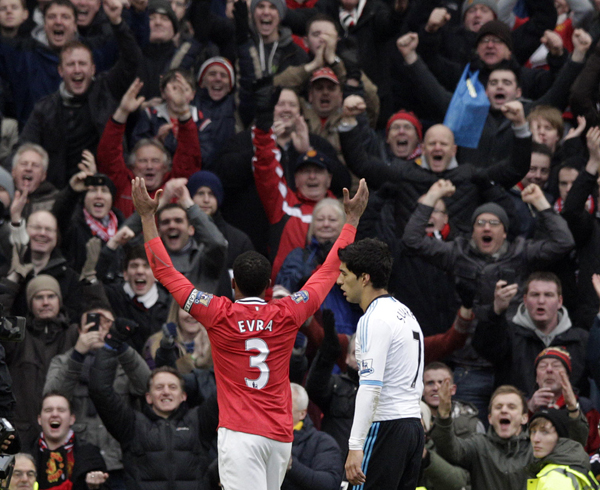 MANCHESTER, England - Luis Suarez is a disgrace to Liverpool and should never be allowed to play for them again, Manchester United manager Alex Ferguson said after the Uruguayan refused to shake Patrice Evra’s hand on Saturday.

The Premier League game at Old Trafford, which the hosts won 2-1 to go to the top of the table, was the first time the two players had met since Suarez was banned for eight matches for racially abusing the United defender in October’s reverse fixture at Anfield.

Striker Suarez kept his eyes down when Evra offered his hand during the traditional pre-match handshakes and carried on walking when the Frenchman grabbed his arm to try again.

“He’s a disgrace to Liverpool Football Club - that player should not be allowed to play for Liverpool again,” Ferguson told Sky Sports.

“The history that club’s got and he does that - a situation like today could have caused a riot. It was terrible what he did.”

Liverpool manager Kenny Dalglish, who earlier said he was sure Suarez would shake Evra’s hand as both clubs sought to draw a line under the matter, said he had not seen the snub.

“Ask him and we’ll take it from there,” he told Sky. “I think you are very severe, you are bang out of order to blame Luis Suarez for anything that happened here today,” added Dalglish when asked if he would have to look at the issue as it had led to confrontations between players at halftime and fulltime on Saturday.

“It was a terrible start to the game, a terrible atmosphere it created,” he said.

“I just could not believe it because Patrice and I had a chat this morning and he said, ‘I’m going to shake his hand, I’ve got nothing to be ashamed of. I want to keep my dignity.’”

Wayne Rooney scored two goals in three minutes at the start of the second half to secure the points for United but Suarez, booed every time he touched the ball, still had more to add to the game when he snatched an 80th-minute consolation goal.

Evra celebrated wildly at the final whistle as if United had won much more than just a game against their archrivals, but the Frenchman’s decision to jump up and down near where Suarez was standing did not go down well with Ferguson.

“He shouldn’t have done that,” said United’s manager.

Rooney said his teammates had tried to avoid being distracted by what happened before kickoff.

“We are all professional and we have to concentrate on our job on the pitch,” he said. “It is between two individuals and is not for us to get involved with.”

United defender Rio Ferdinand, whose brother Anton is at the centre of a separate racism row with Chelsea captain John Terry, facing criminal charges over alleged remarks made to the Queens Park Rangers player, did not offer his hand to Suarez.

“After seeing what I saw I decided not to shake his hand,” said Ferdinand. “He’s not got the respect he needs to have in these situations and acknowledge he’s made a mistake and say sorry.

“I lost all respect for the guy after that. It could have been resolved today, maybe, between the two people who are involved.”

Last month officials agreed no handshakes would take place in the FA Cup fourth round meeting between the Rangers and Chelsea because of tensions between Terry and Anton Ferdinand.

Asked whether Saturday’s handshakes should have been scrapped for the same reason, Ferguson replied, “That’s a different issue altogether.

“It’s never been a problem really up until this situation regarding racism. Really, we have got to get our house in order in terms of fighting racism.

“It’s an important issue in this country. Football has come a long way since the days of [former England and Liverpool winger] John Barnes, and the fans throwing bananas at him, to where we are today.

“We can’t go back, we have to move forward and ban it all together,” added Ferguson. Reuters