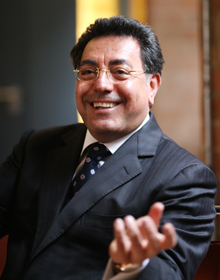 It’s a good idea for Korea to gradually turn to renewable energy despite huge initial costs, according to Samir Brikho, chief executive of AMEC, the engineering, project management and energy consultancy company based in the United Kingdom.

After addressing the World Economic Forum in Davos, Switzerland, Brikho visited Korea to meet with chiefs of energy and resource-related companies.

Brikho said the global trend is for countries to start increasing their use of renewable energy, although it can be difficult at the start, in an interview with the Korea JoongAng Daily.

“The world is committed to work together to cut carbon emissions,” Brikho said. “The best way to do that is to not spend energy, but we can’t do that.

“So we need to deploy new technologies,” he said. “But not every country has the same recipe. Some would go for more nuclear energy, while some others go for carbon capture and some for renewable energy.”

Brikho said that for some countries, renewable energy is becoming an inevitable option. “Korea is doing the right thing now,” he said. “In the beginning, any new energy will cost more, but I don’t think we have many options before we get the economies of scale. Every country should do its utmost to reduce carbon emissions.”

Korea has been investing in nuclear energy for a long time, Brikho said, “So it’s time to move to renewable energy. In the long term, it is good for the country and good for the world.”.

As for Korea’s worries about the huge costs of such a change, Brikho said, “Look at the total equation: If we destroy the environment, it will cost much more to recover.”

He suggested that Korea could resolve the cost issue by utilizing its innovation capability.

“Korea has been very famous for its innovative solutions in terms of IT, communications and media,” he said. “It’s time for Korea to take the challenge and to achieve some innovation in terms of energy, too.”

AMEC’s customers include global energy giants like BP, Shell, EDF and also the U.S. Navy. It provides services for around 60 trillion won ($53 billion) worth of projects around the world.

It was a domestic market-centered engineering company before Brikho joined the company in 2006. The secret to transforming of AMEC into an international company is “our people,” Brikho said. “We have the best army of engineers, and we reinvest in these people.”

AMEC has business with Korean companies. According to Brikho, it has three joint ventures with the Korea Electric Power Corporation, Korea Gas Corporation and Korea Development Bank.

“AMEC has been very active in the environmental sector of Korea, especially in oil and gas activities,” he said. “We also encourage Korean businesses to make investments in the U.K.”

Relations between Korea and Brikho first started in 1999, when the company was involved with the construction of Incheon Bridge. “It is an impressive icon both for Korea and AMEC,” he said.” I am very proud of being part of the project. From a design point of view, it is very good, from a safety point of view, it is very high quality and also in terms of profitability.”

As for Korea’s efforts to raise its self-sufficiency in resources, Brikho said it is on the right track. “On energy, you need to look at three dimensions: energy security, affordability and acceptability,” he said. “The last one means that energy is environmentally sound.” He explained that Korea has been focusing on the first two dimensions and is now moving onto the third dimension.