Army players in on V-League scandal

Army players in on V-League scandal 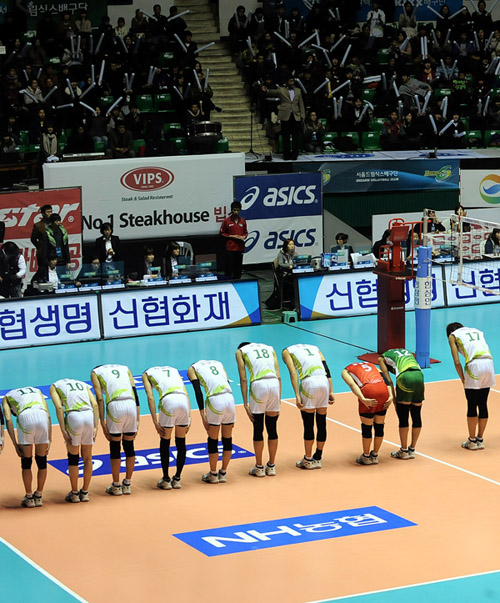 In the midst of a Nonghyup Korea Professional Volleyball League (V-League) match for the 2011-2012 season between men’s teams Seoul Dream Six and the Korean Air Jumbos in Jangchung Gymnasium in central Seoul, players from both teams bow their heads yesterday before the start of the game. The players bowed in apology for the Sangmu team’s match fixing scandal. The season runs until April 15. [NEWSIS]

The Korea Armed Forces Athletic Corps (Sangmu) announced Saturday that its Seongnam Sangmu volleyball team, comprised of conscripted players, is going to forfeit the rest of the current Korean professional volleyball league season as their players are suspected of involvement in a match fixing scandal.

The Ministry of National Defense expressed during a press conference yesterday its “regret that the Sangmu team was involved in a match fixing scheme.” Kim Min-seok, spokeman of the Defense Ministry, further stated, “Careful review of measures for the management of the Sangmu Volleyball Team will be planned from results of the prosecutors’ investigation” and that they are currently reviewing many ideas such as completely disbanding or moving Sangmu to the amateur league.

Three players from the Korea Professional Volleyball League (V-League) - two retired and one active player - and a gambling broker surnamed Kang, 29, were arrested on Feb. 8 on suspicion of rigging games for financial return.

The prosecutors revealed last week that one of the suspected players, surnamed Yum, deliberately made mistakes during at least four V-League matches, including the match against the Cheonan Hyundai Capital Skywalkers, which Kepco 45 lost 3-1 to in February 2010.

Yum, who played as a libero (a defensive specialist) and retired last July, received dividends from broker Kang, who earned his money through illegal betting Web sites, according to law officials.

It was reported that Kang gave 30-year-old Yum about 10 million won ($8,960) in return, and the player apparently gave some of the money to two other teammates participating in the scheme.

The rest of Sangmu’s 10 remaining matches will count as losses, according to the Korean Volleyball Federation (KOVO), the governing body of the V-League, who convened for an emergency meeting on Saturday regarding Sangmu.

Meanwhile, Daegu District Prosecutors stated yesterday that at least three players in the women’s volleyball league are also under suspicion of match fixing and will be summoned for investigation soon. Prosecutors stated that this information was revealed during questioning of broker Kang, and they will investigate further.