Down and out at Seoul Station

Down and out at Seoul Station 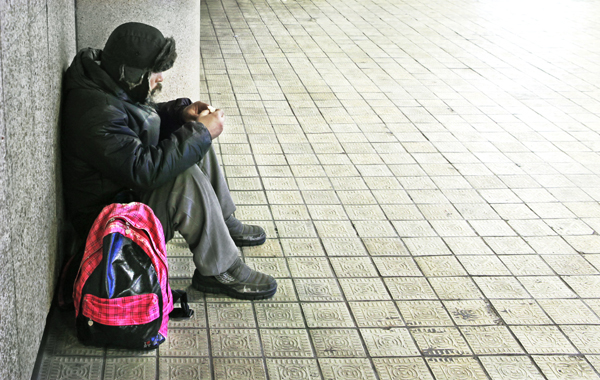 A homeless person finds temporary shelter from the winter in an underpass of Seoul Subway Station on Friday night. The city estimates there are 400 homeless people in the area needing shelter. By Park Sang-moon

At dawn on Feb. 2, the temperature in Seoul hits minus 17 degrees Celsius (1.4 degrees Fahrenheit) for the first time in 55 years.

Later that evening, I approach a queue of homeless people in an underpass leading to exit no. 2 of the Seoul Subway Station waiting to get into an emergency shelter for the night. I’m going to join them to see how the homeless survive in the winter.

I take a taxi to the station, but its pleasant warmth dissipates within 10 minutes. It’s minus 12 degrees Celsius, and the wind is piercing.

“Hey pretty boy, stop staring and get your butt to the end of the line if you want to get in there safely,” a drunken-looking guy in his mid-40s warns me. 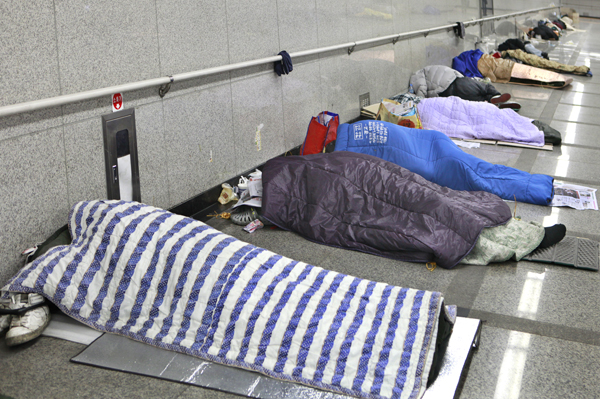 A group of homeless people denied space at a city-run shelter camp out in an underpass leading to exit no. 2 of the Seoul Subway Station Friday, attempting to ward off the cold with blankets and cardboard boxes. By Park Sang-moon

I do as I’m told. I pull up the hood on my black Urban Outfitters coat, which I never do because it messes up my hair.

The shelter was opened by the Seoul Metropolitan Government in December, four months after it started evicting the homeless who used to sleep inside Seoul Station. They are now kicked out of the station at 1:30 a.m. and not allowed back until 4:30 a.m.

The shelter opens at 7:30 p.m. At 7:20, young guys with robust physiques cut into the line at the front. The handful of staffers pretend not to notice.

“Those bastards never respect the elderly,” says Jin, a 51-year-old homeless man. “They spend time in some warm place and cut into the line like sneaky rats.”

At 7:30 a staffer announces, “We will try to squeeze in as many as we can today, so please enter in order!” I later learn the capacity is 80 individuals, but because of the cold, they’re squeezing in around 120.

But the line has 160 to 180 people, and Jin fails to get into the shelter. Apparently, there are around 400 homeless people trying to get through the winter around Seoul Station, according to the government.

Pulling a battered suitcase on wheels, Jin proceeds to another underpass between exits 2 and 7. I follow him, identify myself as a reporter, and ask if I can rough it with him. He looks me up and down, sighs and tells me to follow him.

We go into a men’s room in Seoul Station, and Jin pulls sheets of newspaper from his suitcase. He crumples them into balls and suggests I put them inside my shoes, which got drenched from the snow on the streets. “You must dry your wet shoes if you don’t want to get frostbite,” he says.

Jin strips his upper-body and pulls a Gore-Tex shirt from the suitcase, on top of which he puts on the rest of his shirts. The worst thing to have next to your skin on a winter night is a cotton shirt, he says. The cotton absorbs sweat and then freezes, rendering the rest of the garments useless against the cold. You become like a refrigerator: always cold on the inside, no matter what the temperature is on the outside.

I ask to see what else he carries in his suitcase. He has extra socks, blankets, an old North Face parka he uses as a spare, Tylenol, fever reducer and anti-parasite pills.

Most important to Jin is a notebook with the schedules for all the free meals available in the area, mostly offered by civic groups, religious organizations and the city government. He also has a Philips kettle in which he can cook noodles.

Jin checks my cold-weather gear and sighs again. He suggests I buy a gauze face mask and gloves, but I only buy a mask because I want to spend the night just as Jin does. I purchase a pair at a drug store, each costing 3,000 won ($2.60), and give one to Jin. He looks at the mask for a moment and goes into the drug store and exchanges it for three disposable heat packs.

It is now 8:30 p.m., and the temperature has dropped to minus 13 degrees Celsius. Jin and I go back to the underpass and prepare to settle down for the night. Jin unties three flattened cardboard boxes strapped to his suitcase and, with some duct tape, creates a kind of coffin out of two of them. He pulls out his blankets and wraps his body. He gives me the final box to use as a cushion. For the first few minutes, it seems to fulfill that function. But soon, it’s frozen through. I feel like I’m sitting on the ice rink at Seoul Plaza.

Commuters pass us. I hear one of them say, “My God, in this weather?”

We chat for half an hour and Jin tells me how he became homeless. He graduated from a junior college in North Jeolla and managed to get work at a medium-sized company that manufactured components for music devices such as cassette players and CD players. But the Asian economic crisis hit, and he was fired after four years. He says about 200 clerks and production workers lost their jobs at the time.

Jin borrowed 20 million won ($17,800) from a bank, putting his parents’ house up as collateral, and opened a snack bar, but it went under after eight months. The bank took his family’s house, and they were driven out to a poor village in Woonrim-dong, Gwangju.

“It was torture facing my old parents every day,” Jin says. “I just ran away to Seoul and tried to get a job, but the situation in this city is worse than in Gwangju. For someone who barely graduated from a junior college in a rural area, it was impossible to get a job.”

At 10 p.m., Jin suggests we take a break in Seoul Station. He asks another homeless person to secure his space, bribing him with a cigarette. When we get into the relatively comfortable station, about 50 homeless people are wandering around inside. Some try to sleep on chairs, but Korail officials and police rouse them.

I take a 1.5-liter plastic bottle and fill it with hot water in a men’s room. I hold the bottle to my chest and warm my hands, upper body and then my feet. I feel like I’ve shrunk from the cold. I watch a couple of television programs, which distracts me from my discomfort.

Around 1 a.m., more Korail officials and police appear in the station to evict us. I go to the men’s room again to fill my plastic bottle. I look around to see if anyone is watching and put my hands in a basin filled with warm water for five minutes.

I return to the underpass at 1:30 a.m., and the temperature has dropped to minus 14 degrees Celsius. I put more newspaper in my shoes and wrap them with paper and put each foot in a plastic bag, tying them tightly around my ankles, hoping for some insulating effect. I adjust my mask to cover my mouth and chin. Jin had counseled me not to cover my nose because the breath is moist and the mask will freeze. Finally, I put a heat pack on my neck and lean my back on an icy wall.

To kill time and distract myself, I operate an application on my iPhone that streams live radio shows. Cold winds keep slapping my face, and the chill penetrates to my bones. After a couple of hours, images of people, including my parents, brother, and my close friends, flash in my head.

I ask Jin if he has experienced the same thing.

“Every day,” he replies. “The only difference is that the images of my parents’ faces are getting cloudy.”

At 4:30 a.m., Jin rises to return to the warmth of Seoul Station. I rush into a convenience store and buy us two cans of hot coffee.

“Be a good son to your parents,” Jin tells me before walking away.