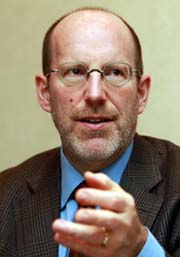 North Korea, led by new leader Kim Jong-un, is conducting a second currency reform to tighten its grip on the sprawling market economy, according to a renowned U.S. expert on the North’s economy.

Marcus Noland, a senior fellow at the Peterson Institute for International Economics, said in an interview with the Korea JoongAng Daily and the JoongAng Ilbo last Thursday that the North is making a move similar to one seen in years past.

The North’s currency reform in November 2009, which put a cap on the amount of foreign currency North Koreans were able to exchange, was meant to strengthen state control over the economy.

“Right now, we observe something similar going on, where the state is engaging in a variety of behaviors to encourage or force foreign currency into the bank system,” Noland said.

The previous currency reform in the North is thought to have failed due to constricting the activities of a black market deemed as a significant source of food and income for North Korean residents. A chief manager of the reform, Pak Nam-gi, was rumored to have been executed in March 2010 as a scapegoat for Kim Jong-il’s regime in order to ease public discontent.

Kim Jong-un, educated in Switzerland, was expected by some to seek market-oriented policies more so than his late father Kim Jong-il. A similar personality cult is being built around him, but it is unclear how much legitimacy the North Korean people are granting the junior Kim as their leader.

“What’s going on right now is the state is trying to gather up foreign currency,” Noland said. “The way it was doing it initially was by auditing entities that have been trading with China to find out how much money they are making in China, forcing them to deposit foreign currency into the state banking system, so the state would have access to the foreign money.”

He said the North’s authorities are now imposing the regulation even on households, going house to house looking for foreign currency, trying to force people to put it into banks.

Noland said the action may be to hoard cash for major state celebrations later this year, including the celebration of the 100th birthday of North Korea’s deceased founder Kim Il Sung in April.

People in the North are not happy about that, he said, and the people or the companies subject to the regulation are reporting smaller amounts of money than they actually have to the banks, sometimes even bribing bank officials.

He said some traders are bribing policing authorities to continue illegal, profit-seeking activities, in particular in the border areas in North Hamgyong Province, which is creating conflict between the regular police and the police who work for the security ministry.

“There are a lot of fights going on between different security agencies over the control of police functions, so it is a fairly complicated situation,” he said.

Noland, who visited Seoul to participate in a global seminar hosted by the Korea Foundation last week, wrote a book “Korea after Kim Jong-il” in 2004, speculating how the North Korean regime change would happen and what a new regime would look like.

During the interview, he said the current North Korean system is less tolerant to poor performance compared to 15 or 20 years ago.

However, he said that political instability will come from disagreements within the elite, rather than in the form of a mass public movement resembling a democratization movement. Anti-dictatorship protests in other parts of the world will not likely take place in the North.

“The [North Korean] society is very atomized,” he said. “You may be unhappy about one thing. And your colleague is unhappy about the same thing, but you are afraid to talk to each other, much less organize some activities.”

The only protests probable in the North, he said, are for so-called pocketbook issues, largely dealt with by women, who take charge of providing food to their families.

The North is seeking growing business ties with China, but Noland said it is only within its capacity to fend off the spillover effect from the marketization of China. He said the North’s leadership is concerned that too much reliance on China will turn the North into a province of China.

“The state always had a very ambivalent view toward the market,” he said. “I would characterize the North Korean attitude today as ‘We want to be modern, we want to be prosperous, [but] we want it on our own terms.’?”

Asked of the prospect of the resumption of the six-party talks on the North’s denuclearization, which have been delayed after Kim Jong-il’s death, Noland said the talks could resume this year. But, he doubted the North will drop the entire nuclear program.

“It may be possible they can negotiate some constraint on the nuclear program, like stopping the highly enriched uranium program,” he said. “There may be things they are willing to progress on, but I don’t see how they can give it away.”

He said diplomatic pressure rarely moves the North from its path, as was shown when it continued to pursue nuclear programs even when exposed to the “sunshine policy” of the South’s Roh Moo-hyun administration.