Ahead of concert, pianist struggles with cost of fame

Ahead of concert, pianist struggles with cost of fame 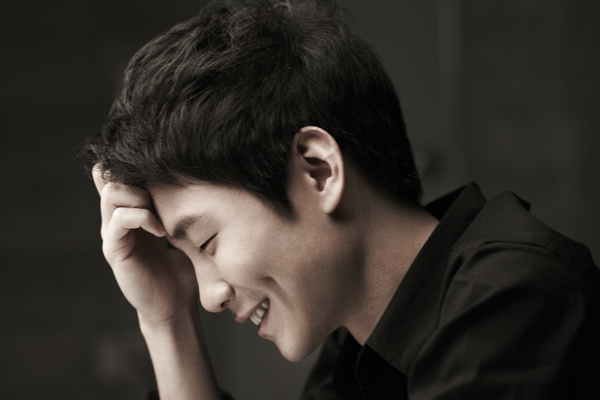 Pianist Lim Dong-hyek is playing 11 concerts in Korea to celebrate his 10th anniversary. The concert in the capital is on Saturday at the Seoul Arts Center in southern Seoul. Provided by Credia


It was 2:30 p.m. on Jan. 28 in Seoul when Lim Dong-hyek picked up the phone in New York for an interview. Though it was past midnight there, the virtuoso pianist had just returned from the nearby Julliard School, where he had spent the afternoon practicing for his current 11-city tour of Korea in celebration of his 10th anniversary. When asked if his rehearsals were going well, the answer was surprising.

“Not at all,” he groaned. “My reluctance to practice is a bit too extreme, though I know I’ll eventually reach a level I’m satisfied with.”

He explained that his current slump probably has its origins in the intense training regimen he has maintained for the past 20 years. But it is also easy to imagine that a series of personal misfortunes over the past two years may also have dealt a blow.

The 28-year-old heartthrob, who is known for his boyish face and slender physique, surprised fans by tying the knot in 2010 at what was an early age for a Korean man. The engagement was even more shocking because it came only a few months after the sudden death of his mother.

Recently, he surprised fans again with the news that he was getting divorced, though he has declined to comment on it.

Born in Seoul, Lim’s musical training ground was in Russia. He moved there at age 10, after his father was dispatched there for work, and entered the Moscow Central Music School. It wasn’t long before he was recognized as a prodigy. He later moved to Germany and then to New York in 2007. He is currently studying at Julliard.

At his upcoming concerts in Korea, where he has played every two years since his debut, Lim will play works by two Russian composers in a tribute to the music of his youth. The program includes Tchaikovsky’s “The Seasons,” Op. 37b, and two preludes, and Rachmaninoff’s Piano Sonata No. 2 in B flat minor, Op. 36.

Q. What is the significance of the repertoire for your upcoming concert tour?

A. I don’t impose any special meaning on the works I choose to play in my recitals. They only need to be good to listen to. Some say these pieces are overly popular, but I believe there is good reason for that. Rachmaninoff’s Piano Sonata No. 2, for instance, is as listener-friendly as his Piano Concerto No. 2, and the sonata is easy for audiences to enjoy. Most of the 12 short character pieces in “The Seasons” are simple, though some are quite colorful and passionate.

What is special about the Russian works you will play?

I studied piano in Russia for a decade. Since that’s where I spent my teen years, what I learned there has had the greatest impact on me as a musician. To be honest, there aren’t many good piano pieces by Tchaikovsky, since he wasn’t really a pianist and mostly composed symphonies. But Rachmaninoff is different. I can’t help but love his works as much as I love Chopin’s since they are so beautiful.

Do you feel your taste in music has changed as you’ve gotten older?

Not necessarily, although I am not sure how my taste will evolve when I’m 50. I’ve always loved beautiful music. And when it comes to choosing what I want to play, the pieces don’t have to deliver any special meaning. Some may claim that beautiful pieces lack depth, but I don’t agree. Take the Bach “Goldberg Variations,” for example. They are beautiful yet deep.

One thing that is certain as I get older is the way I play is changing. My tempo has definitely slowed, and my fingers don’t move as fast as when I was in my teens and early 20s. At the time, I had nothing to be afraid of because I was so energetic.

You’ve lived in New York since 2007. What is it like to live there?

Living in New York is very different from living in Germany, where I spent three years studying at the University of Hanover. I’m not really a big fan of New York since capitalism seems to dominate city life, skyscrapers are everywhere, everyone rushes around and people are mostly inhospitable. It’s not a city I want to live in when I’m older, but it is worth living here now.

What do you do when you’re not practicing?

I play games on my PlayStation. Lately, I’m so addicted to Tekken that I sometimes play for 15 hours in a row.

You played a duet with the legendary Argentine pianist Martha Argerich during the Argerich Music Festival in Beppu, Japan, in 1999 and released your debut album of Chopin, Schubert and Ravel under the “Martha Argerich Presents” series in 2002. Do you still keep in touch?

It’s been a while since I last contacted her. That’s partially because I rarely use e-mail and I don’t like texting. She’s busy, and I’m busy, but I know I can reach her any time.

You achieved great success in your late teens and early 20s. What were the pros and cons of early fame?

You have to sacrifice so much. Whether it was worth it, I can’t tell now. But I never had the luxury of playing ball with friends because I had to practice. My childhood was pretty abnormal. Looking back, I don’t think it had to be that extreme. Probably because I practiced so hard when I was young, I’m reluctant to practice now.

Did the loss of your mother or your recent divorce have an influence on your music?

Just because I lost my mother and got divorced, my music didn’t dramatically become full of sorrow and grief. I don’t believe in such theories.

Do you have any albums or projects scheduled after the tour in Korea?

I have recitals and concerts scheduled in Japan and will also play with the Chicago Symphony Orchestra - all in May.

Then I will perform Rachmaninoff’s Piano Concerto No. 3 for the first time in October. It’s a huge challenge because the piece has more notes than in 27 Mozart concertos combined.

This is not the right time, although I expect that time will come. But my dream has always been to remain a performer.