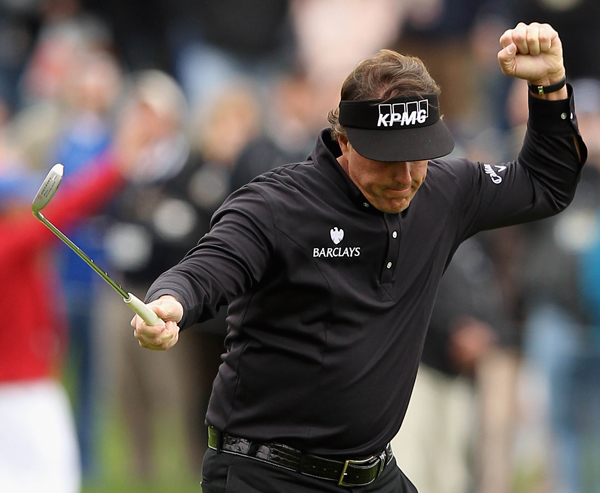 Phil Mickelson celebrates his par-saving putt on the 15th hole during the final round of the AT&T Pebble Beach National Pro-Am at Pebble Beach Golf Links on Sunday in California. [AFP/YONHAP]

PEBBLE BEACH, California - Phil Mickelson went from a six-shot deficit to a two-shot lead in just six holes, closed with an eight-under 64 for a two-shot victory over Charlie Wi and gave Tiger Woods a thrashing at the Pebble Beach National Pro-Am on Sunday not many saw coming.

Mickelson and Woods played in the second-to-last group, and Mickelson beat him by 11 shots. He won for the fourth time at Pebble Beach, and became only the ninth player in PGA Tour history with 40 wins.

“Pebble Beach .?.?. it feels awesome no matter what number it is,’’ Mickelson said.

It was anything but that for Woods, who was reduced to a supporting role on a cool, overcast day along the Pacific. Right when it looked as though Woods might still be in the game after holing a bunker shot for birdie on the par-3 12th, Mickelson answered by pouring in a 30-foot par putt.

Mickelson seized control for good with a 40-foot par save on the 15th hole, and he played it safe - Mickelson is capable of that every once in a while - on the 18th hole and still made birdie.

Wi, who started the final round with a three-shot lead, four-putted for double bogey on the opening hole and never quite recovered. He closed with back-to-back birdies for an even-par 72 and his fifth runner-up finish on tour.

It was the third straight week on tour that the winner started the final round at least six shots behind a 54-hole leader going after his first tour victory.

The shocker, though, was how Woods fell apart.

He has been taking big strides with his game over the past few months, and he looked poised to break through after a 67 in the third round at Pebble Beach got him to within four shots of the lead.

But he failed to make birdie on the easy opening stretch at Pebble Beach, and even when he made his first birdie at the par-5 sixth, Mickelson poured in a 20-foot eagle putt to take the outright lead.

“I didn’t hit it as bad as the score indicated, but I putted awful,’’ Woods said. “As good as I felt on the greens yesterday, I felt bad today. Anything I tried to do wasn’t working. Consequently, I made a ton of mistakes on the green.’’

Two weeks ago in his 2012 debut at Abu Dhabi, United Arab Emirates, Woods was tied for the lead with unheralded Robert Rock going into the final round and didn’t break par, tying for third.

Woods used to own Mickelson, but that changed at the 2007 Deutsche Bank Championship. This was the fifth straight time Mickelson posted the better score when playing in the same group as Woods in the final round.

Mickelson has won three of those tournaments, although they have yet to be in the final group on those occasions.

Mickelson started his season sluggishly, failing to crack the top 25 at the Humana Challenge and Phoenix Open, and missing the cut at Torrey Pines. He said his putting was as good as ever, and it was a matter of getting his game in sync.

It simply sang on Sunday, mostly his amazing touch on the greens - a long eagle putt on the second that caught part of the hole, long two-putts for par and enough birdies to make him a winner at Pebble Beach again.