SK’s Chey gets on Hynix board

SK’s Chey gets on Hynix board 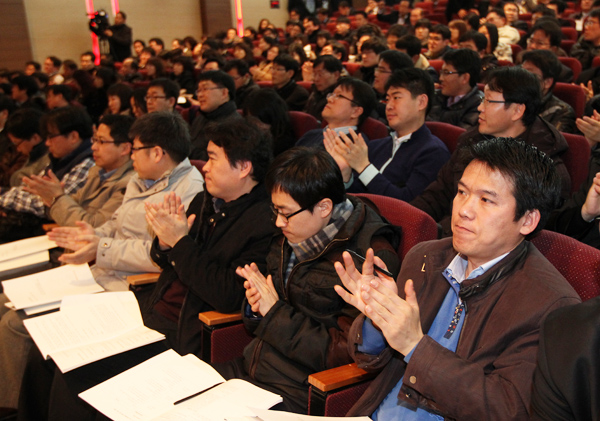 Shareholders of Hynix applaud the nomination of SK Group chairman Chey Tae-won as a board member at the company’s headquarters in Icheon, Gyeonggi yesterday. About 42 percent of the shareholders voted for Chey, while 16 percent opposed. [YONHAP]

Shareholders of Hynix Semiconductor approved yesterday the appointment of Chey Tae-won, chairman of SK Group, as a member of the board despite the fact that he is being prosecuted for embezzlement.

But there was controversy over the legitimacy of the vote by the National Pension Service, the largest minority shareholder of Hynix.

Chey, chairman of Korea’s third largest family-controlled conglomerate, was elected a board member at a shareholders’ meeting held at Hynix headquarters in Icheon, Gyeonggi yesterday.

Chey was convicted of account fraud at SK Global in 2003. Last month, he was indicted for embezzling money from the SK coffers. His younger brother Vice Chairman Chey Jae-won was arrested. The two men are being investigated to determine whether they embezzled 99.2 billion won ($86 million) from the company. 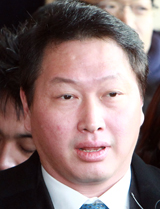 SK Telecom, the telecommunication unit of the group, took over Hynix last year, buying a majority of its shares for 3.37 trillion won.

On Friday, the NPS convened a committee on voting rights to decide its vote on Chey’s nomination, and a three-hour debate ensured. The nine-member committee couldn’t agree whether Chey’s presence on the board would benefit Hynix.

Three members were opposed, three approved, one was neutral and one declined to vote. One member was out of the country.

Finally the committee decided to split their votes for and against Chey. Subsequently, two committee members resigned, including Kim Woo-chan, professor at Korea Development Institute. “The decision wasn’t made on behalf of the NPS,” Kim said. “It’s part of favoritism toward the chaebol.”

The opposing members insisted that guidelines said they had the right to oppose the appointment of a candidate who has a history of damaging a corporation’s worth or interests of shareholders in the past.

“It is unreasonable to cast a vote amid growing risks in the aftermath of the second scandal at SK Group early this year,” Kim said.

The NPS members were not the only opponents of Chey’s appointment. In a report, the Institutional Shareholders Services, a global advisory agency, also discouraged Hynix from taking on Chey as a board member.

SK Group didn’t make an official announcement regarding the NPS controversy. “It’s not right to make a comment about such internal affairs at the NPS,” an official at SK said.