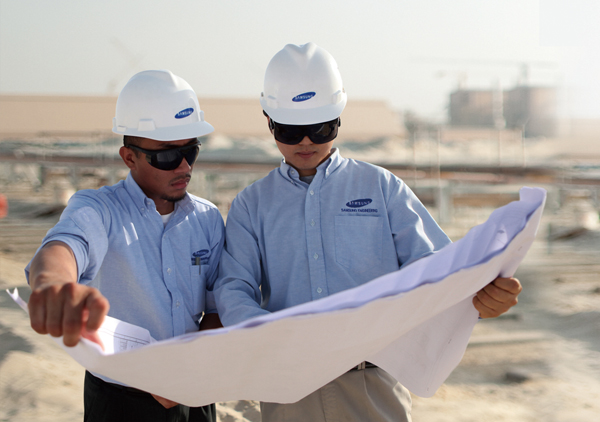 For the first time, Samsung Engineering outstripped Samsung C&T in sales last year, after being in the shadow of the Samsung Group’s original construction subsidiary for more than two decades.

It was only three years ago that Samsung Engineering broke the 4 trillion won sales mark, which Samsung C&T reached in 2000.

The financial sector sees the one subsidiary rising while the other declines.

“The outlook for Samsung Engineering is bright, as it is expected to reach 16 trillion won in orders this year following 12 trillion won last year,” a researcher at Woori Investment & Securities said.

The company enjoyed media attention in December when Kim Jae-youl, the husband of Lee Seo-hyun, the second daughter of Samsung Group Chairman Lee Kun-hee, was appointed its president of Management Planning Division.

Samsung C&T, a merger between Samsung E&C Company and Samsung Corporation in 1995, is one of the original Samsung subsidiaries, having been started in 1977. Samsung Engineering was acquired by the group in 1978. It was established in 1970 as the state-owned Korea Engineering, the country’s first engineering company. 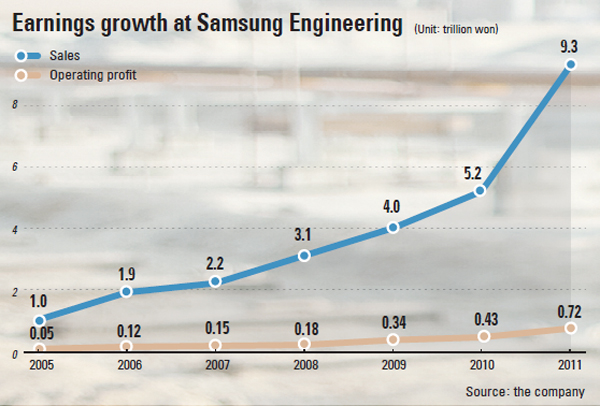 Now the adopted company is outshining the group’s natural child.

Samsung Engineering focused on accumulating expertise in plant engineering in the domestic petrochemical market during the 1980s and 1990s. It began making inroads into Southeast Asia in the mid-1990s. The company hit the 1 trillion won mark in sales in 1996, the first engineering company in Korea to do so.

But its expansion into Southeast Asia coincided with the Asian financial crisis and its earnings plunged by 20 percent in both 1997 and 1999. The fallout from the crisis continued well into the early 2000s.

The company pulled back from Asian markets and turned its sights to the Middle East. It won its first order for hydrocarbon plant projects from Saudi Arabia in 2003.

Current President and CEO Park Ki-seok, who was then director of the chemicals division, helped the company rebound, an official at the company said.

Park is a career Samsung Engineering employee who started out in field work.

It took several years for the company to become a top-tier engineering company in the Middle East, competing against Western engineering firms.

In 2006, Samsung Engineering won a contract to help build the world’s largest ethylene plant from the National Industrialization Company of Saudi Arabia along with three competing companies.

“Koreans are fast and flexible, and have leadership. This is what construction people say in the Middle East,” a Samsung Engineering official said. 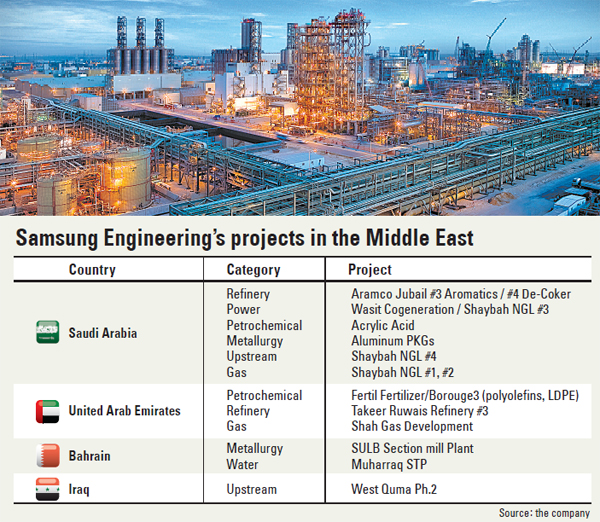 Samsung Engineering finished its part of the ethylene plant ahead of schedule while the other companies struggled to complete their parts due to a shortage in workforce and materials, the company said. Samsung Engineering capitalized on its time and cost management skills based on a global procurement system. The company maintained close relationships with top materials vendors, it said.

Another key to its success is its willingness to take risks. While many global EPC companies prefer to stick to cost-plus contracts, Samsung Engineering has signed lump-sum turnkey contracts that are more risky if there are delays or increases in cost of materials.

“[Samsung Engineering] is simply more prepared to take the risk to bid low and execute a project well, and that is the real game changer,” one senior-level executive from a European EPC firm was quoted as saying in the Middle East.