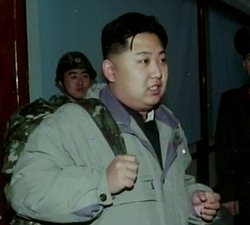 Ahead of deceased leader Kim Jong-il’s 70th birthday on Thursday, North Korean politicians and military leaders held their annual mass rally to show their unending loyalty for him at a secret camp in front of Mount Paektu.

The official Korean Central News Agency reported yesterday that a group of high-ranking officials launched the ceremony on Sunday at a milyong (secret military camp) near Mount Paektu, where founder Kim Il Sung carried out his anti-Japan guerrilla war during the Japanese colonial rule and where Kim Jong-il is said to have been born.

This year’s event, however, also emphasized the legitimacy of successor Kim Jong-un, likening his personality to the sacred nature of Mount Paektu, the highest mountain on the Korean Peninsula.

A string of emerging inner-circle figures who guarded the hearse at Kim Jong-il’s funeral in December attended the rally and delivered speeches.

“We will become an army of suicide bombers to protect our Supreme Commander [Kim Jong-un] by building up a wall ten thousand strong,” Ri Yong-ho, chief of the general staff of the army, said at the rally, the report showed.

“We should drop an iron hammer on South Korea’s puppet groups and Yankee imperialists without mercy and hesitation, accelerating our preparation to end the fight. We will eventually finish the half-century-long history of division of our people.”

Kim Jong-gak, first deputy director of the General Political Bureau, also said, “It is our biggest honor to serve our comrade Kim Jong-un as the highest position of the party and the revolution with characteristics of Mount Paektu. We will build up the precious revolutionary legacy of our father general [Kim Jong-il] by protecting comrade Kim Jong-un as first line guards.”

Despite the national sorrow for their leader’s death, the official media described the atmosphere in North Korea as vibrant and festive, in preparation for one of their biggest national holidays, Kim Jong-il’s 70th birthday.

Kim died at age 69 last year, but the North Korean people are still paying attention to his age and celebrating his birthday as they did before he died, by doing things such as hosting an exhibition of Kimjongilia, a type of begonia that was named after him.