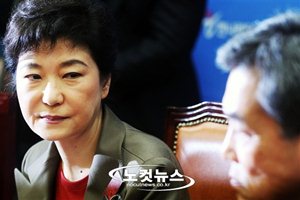 “When they were ruling party members, they promised to implement the Korea-U.S. FTA,” Park said in her speech at a party meeting in the National Assembly yesterday. “However, now that they have become the opposition party they have reversed their previous pledges, demanding to abolish the deal when they win the election. I can’t hand over national affairs to them.

“We, the Saenuri Party, should make a decision to save our nation in the general election two months ahead. We must win the election.”

According to Hwang Young-cheul, spokesman of the ruling party, Park also attacked the inconsistent position of the Democratic United Party in dealing with the free trade deal, at a general meeting of the party previously saying, “[Discussion of] the Korea-U.S. FTA began during the Roh Moo-hyun administration and the president, prime minister and other ministers persuaded [people to pass the bill]. They said the deal is a good thing and if we don’t pass the bill, the future of the nation would be cloudy. And finally it was passed during this administration. Before judging whether the treaty is right or wrong, remarks of politicians should show reliability and consistency.”

The interim leader, who has focused on reforming the sinking ruling party, made the rare criticism against the opposition lawmakers in response to their efforts to raise the issue ahead of the April election. The opposition hopes to consolidate liberals, who are split on ideology but agree that the trade pact with the United States is unfair.

“Renegotiating and withdrawing the Korea-U.S. FTA is an important pledge in the run for the general election,” Lee Mi-kyung, a DUP lawmaker said on a local radio program yesterday.

Shin Kyoung-min, spokesman of the DUP, refuted the criticism, saying “Now the right leadership for the nation is seeking ways to review and renegotiate the Korea-U.S. FTA.”