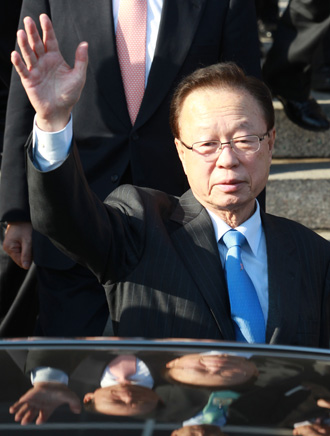 Park Hee-tae, bottom right, bids farewell to National Assembly staff yesterday as he leaves the legislature after he held a press conference to make his last comments on the money-for-vote scandal before his resignation, saying he would “take all responsibility” for the case. [NEWSIS]

National Assembly Speaker Park Hee-tae convened a press conference yesterday at his office to make his last comments on the money-for-vote scandal before his resignation, saying he would “take all responsibility” for the case.

“I have nothing to say about this case and feel sorry about it,” Park said. “I don’t have any intentions to evade responsibilities or make an excuse about the case in the name of longtime customs in our political arena.

“I bitterly regret this case and take all responsibility myself,” Park continued. “I strongly hope that our politics will have a chance to recover and overcome the legacies of the past.”

He also expressed sorrow for his collapsed political career and asked for sympathy toward his aides who were involved in the bribery, including Kim Hyo-jae, his former campaign manager. “I am also heartbroken by the collapse of my dignity, although I lived only for the nation and the people over the past half-century,” he said. “Everything was caused because of my lack of virtue.”

“Including Kim, former senior Blue House secretary for political affairs, I feel sorry for all the people who helped my work [during the election campaign],” he added. “As they don’t have any faults, I hope people give them support.”

After the press conference, he tendered his letter of resignation and left the National Assembly while Assembly staff saw him off.

Park resigned after being accused of distributing cash envelopes to his fellow lawmakers during the campaign for the leadership election of the ruling Grand National Party (now renamed the Saenuri Party) in July 2008.