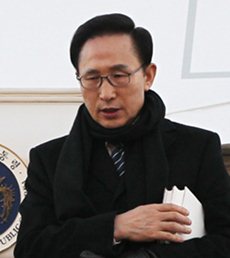 President Lee Myung-bak urged the government yesterday to closely examine “irrational” bills being pushed through the National Assembly in the weeks before April’s general election.

He drew special attention to a bill that would pay compensation to customers who lost money in failed saving banks above the 50 million won ($44,500) provided in national deposit insurance.

His remarks suggested he might veto the savings bank bill if it passes at a plenary session on Thursday.

“Related ministries should actively respond to irrational bills, including the Special Law on Compensation from Savings Banks, from the initial stage,” Lee said during a meeting with senior secretaries, according to presidential spokesman Park Jeong-ha. 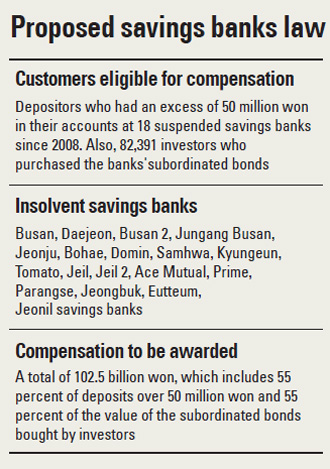 “We have to conduct expert reviews on these bills, including whether they violate the Constitution and what kind of effects they will have if enacted.”

It is the first time that the Blue House has commented on the savings bank bill.

The Assembly’s National Policy Committee passed a bill last week that would compensate customers of the failed savings banks beyond the amount covered by national deposit insurance.

The bill states the government should use its deposit protection fund to reimburse 55 percent of customers’ losses over 50 million won. The Korea Deposit Insurance Corporation (KDIC) reimburses up to 50 million won per customer.

The bill also allows individual investors to receive compensation of 55 percent of the losses they suffered from purchasing savings banks’ subordinated bonds.

If the bill becomes law, over 82,000 bank account holders and bond investors from 18 savings banks shut down by the government for being insolvent would get money back from the government. The total amount is estimated at 102.5 billion won.

“Customers that deposited more than 50 million won in their savings banks accounts and investors investing in subordinated bonds are not protected by law,” said an official from the KDIC.

“The bill damages the foundation of the country’s deposit insurance system and will encourage moral risk by depositors and financial institutions.”

The official said that “most of the deposit protection fund has already been allocated to be used to help restructure the troubled savings banks.”

According to the official, the KDIC raises funding from insurance fees paid by private financial institutions to protect depositors up to 50 million won. He also said the victims of the suspended savings banks chose to do business with them because they offered higher interest, taking a risk.

The labor union of the KDIC also released a statement yesterday saying, “The special law ignores the principles of lawmaking and destroys the country’s financial order. The bill is part of pork-barreling populism to win votes ahead of the April legislative election.”

In the meantime, financial industry officials are saying the bill is specifically targeted at customers of the suspended Busan Savings Bank. The elections in Busan are going to be particularly significant in April, since it is a traditional stronghold of the ruling Saenuri Party, but the opposition seems to be stealing away support.

A recent poll by the JoongAng Ilbo and the Embrain Research Institute showed that candidates who will probably be fielded by the opposition Democratic United Party are more popular than conservatives in several important districts in and near Busan.

“If the law gets passed and the government does compensate customers for their deposits of more than 50 million won, why not reimburse people who lost money after investing in funds or derivatives?” asked a financial investor.

He said that even when the Asian financial crisis broke out in late 1990s, there was no law reimbursing loss for customers at savings banks or any other financial institutions.

“Depositors at savings banks know they’re taking a risk that the bank will become insolvent, but they want the higher interest rates,” the investor said. “They knew they would not receive extra compensation.”

“The ruling and opposition parties may have their own difficulties at hand, but they went too far - way beyond fundamentals,” he said.