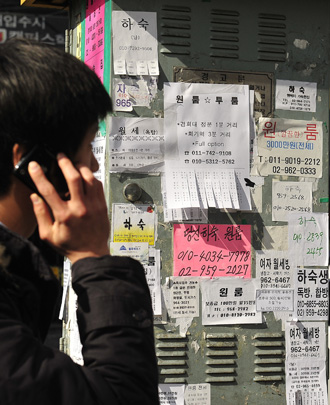 A student reads advertisements for rental housing and boarding houses on a bulletin board at Kyung Hee University on Sunday in Dongdaemun District, eastern Seoul. [NEWSIS]

With the spring semester about to start, university students are battling it out to find housing, but the government’s newly introduced jeonse (long-term housing deposit) support plan for university students is making it harder for those without the support.

Kim Chang-ryul, a real estate broker who operates in the university neighborhood Imun-dong, eastern Seoul, recently received a call from a home owner who had three studios listed with jeonse leases, claiming “Another agent said I can get as much as 70 million won [$62,300].” Once the owner found this out, he wanted to raise the price of the jeonse before putting it out on the market again.

Until recently, each studio was available for a jeonse deposit of 55 to 60 million won. Kim said, “It is the effect of talk circulating among home owners that the government’s jeonse leasing support plan for university students covers up to 70 million won.” He further said that “In order to raise jeonse prices, there are seven to eight cases of landlords withdrawing their listings in a week.”

The Ministry of Land, Transport and Maritime Affairs announced last month that it would provide cheap rental housing for 10,000 university students nationwide and selected 9,000 students to receive the aid last month, including students from low-income families or those with disabled family members. These students could find housing with a maximum jeonse of 70 million won and the Korea Land & Housing Corporation, using the National Housing Fund, would sign a contract with the home owner. Then, the student would sublet the housing from the Land & Housing Corporation, paying them a deposit of 1 million to 2 million won and a rental fee per month of 70,000 to 170,000 won.

A 23-year-old student surnamed Byun, who had previously lived in the school dormitories and was hunting for housing, recently gave up on his search because, compared to last year, jeonse prices had risen by 5 million to 10 million won. Byun stated, “It’s difficult to ask my parents for more help, so I’m thinking of moving into a goshiwon.” Goshiwon are buildings with small, single rooms usually rented out to students preparing for exams.

As it is peak season for house hunting in the neighborhoods near universities, the demand for housing is high, while students, like Byun, are finding it hard to locate affordable housing near their schools. Since most college students can’t afford jeonse deposits, they mostly rely on month-to-month rent.

Students who qualify for support, meanwhile, are having a hard time leasing housing which matches the requirements set forth by the Land & Housing Corporation. Many home owners are reluctant to undertake the extensive and complex paperwork involved.

One 22-year-old student surnamed Lee, who was selected to receive government support for the housing lease, stated, “I went to 50 different real estate agents in Sinchon [western Seoul] but couldn’t find a place, so I’m almost at the point of giving up,” adding that “In that time, I should have just found a part-time job instead.”

Of the 9,000 who will receive government support, a little over 2,000 as of Friday have completed their jeonse contracts so far according to the Ministry of Land, Transport and Maritime Affairs yesterday, while a thousand more are still in the process of finalizing their contracts.

In a market where supply does not meet demand, now that the government money is released, the rise in jeonse price is inevitable. The immediate victims are those that the government’s hastily implemented “university student support plan” intended to help out - students themselves.