Museums with moving parts for all the kids

Museums with moving parts for all the kids 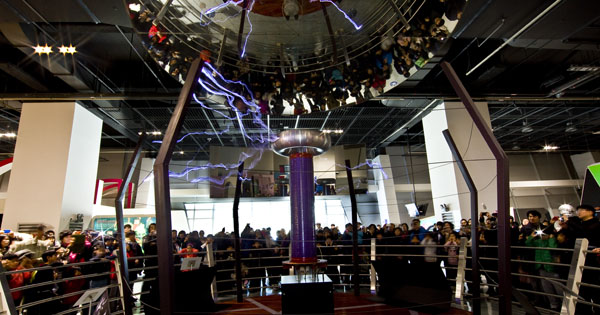 Visitors watch beams flashing from the Tesla coil at the Gwacheon National Science Museum, one of three museums near Seoul with exhibits that are engaging children and adults. By Shin Dong-yeun

Five-year-old Seo Hye-jeong shouted “Sprinkling water is the most exciting thing ever!” as she rotated the waterwheel on a miniature mill inside the Gyeonggi Children’s Museum in Yongin, Gyeonggi. Her mother, Kim Jin-hyeon, 35, smiled as she watched her daughter’s delight. 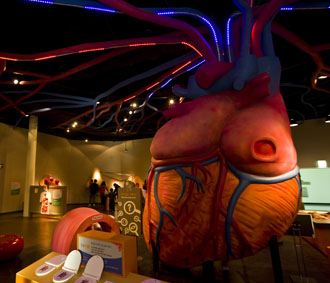 Kim and her daughter are from Gwangmyeong, Gyeonggi, which is around two hours away by bus from the museum. Kim said that although she was quite tired by the time they had arrived, the fatigue had disappeared when she saw her daughter having so much fun.

“She’s still very young, but I feel that by playing with the mill, she gets a vague sense of the science behind it,” Kim said.

Next, Hye-jeong moved to another exhibition hall featuring models of organs in the human body. The most striking is the large-scale model of a human heart located in the center of the room and the numerous veins from the heart that go up to the ceiling. 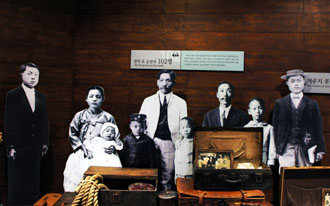 Next to the heart is a treadmill, decorated with small lightbulbs, that Hye-jeong used to measure her heart beat. The lightbulbs blinked when she ran and the faster she ran, the faster the bulbs blinked.

“Do you remember what kinds of food can clog your veins?” Kim asked her daughter.

Hye-jeong answered without a beat, “If we eat a lot of pizza, our veins will be clogged!”

Kim said she feels it benefits children to see with their own eyes objects or experiments they only learned about in books. She added that she has often brought her daughter to similar museums, including The National Museum of Korea and Korean Folk Village, so that she can get as many first-hand experiences as possible before entering elementary school.

“Kids these days get really strict training from an early age, including ‘brain training’ exercises to strengthen their concentration,” Kim said.

“But I don’t think you need to go that far. Just coming to these museums and letting them play around will be much more beneficial for them in the long run.”

The Gyeonggi Children’s Museum is just one of three museums located near Seoul that the JoongAng Ilbo visited that are enticing children and parents with innovative, interactive exhibits that get kids thinking.

Opened in 2008, this museum brings science and technology to life with facilities that include a planetarium and an ecological park.

The museum houses four major exhibition halls, including the Basic Science Hall, which explores a wide range of scientific principles hidden in daily life; the Advanced Science and Technology Hall, exhibiting state-of-the-art technology related to aviation, space, information and communication, life science and robots; the Natural History Hall, showing the process of biological evolution; and the Traditional Science Hall, which showcases objects from past science and technology traditions.

On a recent visit to the Basic Science Hall, a large crowd gathered to watch the Tesla coil, a resonant transformer circuit, in the center of the room.

Suddenly, purplish beams of light flashed in the air and then a thunderous roar echoed through the room.

According to the museum’s instructor, the Tesla coil is used to produce high voltage, low current electricity.

“The Tesla coil was invented for wireless power transmission. The invention of cell phones was possible due to the Tesla coil,” the instructor said.

Nearby, students watched a race car move with the aid of brainwaves in the Advanced Science and Technology Hall. Other children gathered in front of an aquarium with an anemone fish in the National History Hall.

With so much to see and do, visitors are advised to make a plan before arriving. The Children’s Experience Hall is recommended as a starting place for kindergarten students and elementary school students from lower grades.

On a recent visit, to the Gyeonggi Children’s Museum a small boy enthusiastically pumped water from a waterwheel inside the Water Hall as a group of children flocked by his side to see the water spout out.

The museum opened in September as a place where children can enjoy learning basic principles of science using their five senses. It is ideal for preschool children or younger elementary school students, but can be enjoyed by children of all ages.

One popular exhibit is the “skeleton bicycle ride,” in which visitors ride a bicycle that powers a bicycle with a skeleton rider, allowing the rider to observe how the bones move.

Elsewhere, there are interactive storytelling sessions where children can don fairy robes and hear traditional fairy tales. The multicultural families room invites children to learn about different cultures from around the world.

Reservations are recommended because admission is limited to 300. Take the Bundang Line to Giheung Station exit 3 and walk for 15-20 minutes or take a taxi to the museum. For more information, visit www.gcmuseum.or.kr or call (031) 270-8600.

The Museum of Korea Emigration

During the latter part of the Joseon Dynasty when people suffered from drought and battles with Japan, a group of Koreans immigrated to Hawaii from 1902 to 1905, in order to work at sugar cane farms there.

Jemulpo Port in Incheon, which was the departure site for that group of emigrants, was crowded with approximately 7,400 people during that period. Though leaving with the desire for a better life, the new emigrants faced tough lives as strangers in Hawaii as they started the first chapter in Korean immigration history. After that, the Koreans who worked at agave farms in Central and South America continued that history.

The Museum of Korea Emigration History tells the heart-wrenching stories of Korean emigrants. The museum opened in 2008 in celebration of the centenary of the first groups of emigrants to Hawaii.

The exhibit shows how the emigrants married abroad. At the time, old bachelors in Hawaii selected their brides by choosing from pictures of Korean women provided by a marriage broker. The women, who went to Hawaii with nothing but the soon-to-be groom’s photo, were called picture brides.

The Museum of Korea Emigration History is open from 9 a.m. to 6 p.m. and admission is free. Free audio guides are available in Korean, English, Japanese and Chinese. Visitors can also ask a docent to explain the exhibits from 10 a.m. to 4 p.m. The museum is in central Incheon in Wolmi Park, location of the Battle of Incheon during the Korean War. Go to Incheon Station, line No. 1, exit 1, and take bus No. 45 or 720 to the Haesa High School stop. For more, visit mkeh.incheon.go.kr or call (032) 440-4710.