Traders use smartphones to tap stocks

Traders use smartphones to tap stocks 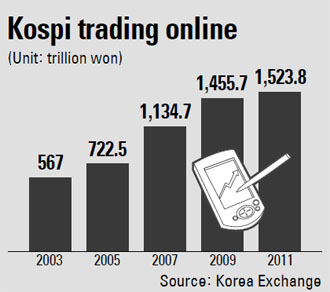 Online stock trading surged to a record high in Korea last year as more investors relied on their smartphones and other online devices to buy and sell, data showed yesterday.

“More than 30 percent of retail investors’ online contracts were traded via smartphones,” said a spokesman for Mirae Asset Securities.