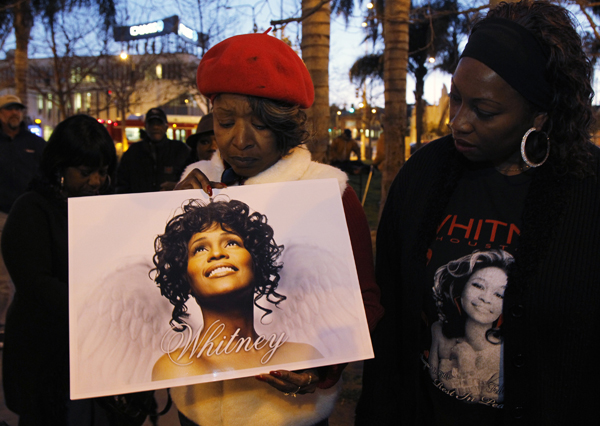 BEVERLY HILLS, California - Whitney Houston was underwater and apparently unconscious when she was pulled from a Beverly Hills hotel bathtub, and she had prescription drugs in her room, authorities said Monday.

Two days after her death, Houston’s body was taken to a small airport in Los Angeles to be flown to her home state of New Jersey, where her family was making arrangements for a funeral at the end of the week.

An autopsy was done Sunday, and authorities said there were no indications of foul play and no obvious signs of trauma on Houston’s body. It could be weeks, however, before the coroner’s office completes toxicology tests to establish her cause of death.

The 48-year-old singer had struggled for years with cocaine, marijuana and pills, and her behavior had become erratic.

Houston was found Saturday at the Beverly Hilton Hotel by a member of her staff at about 3:30 p.m., just hours before she was supposed to appear at a pre-Grammy Awards gala, police Lt. Mark Rosen said.

She was pulled from the tub by members of her staff, and hotel security was promptly notified, Rosen said. She was pronounced dead about a half hour later.

“As of right now, it’s not a criminal investigation,’’ Rosen said, refusing to release further details. “We have concluded our portion of the investigation at the hotel.’’

The coroner’s office released the body to the family Monday morning. Later, a police convoy accompanied two vehicles into a Van Nuys Airport hangar, and a private, twin-engine jet rolled out of the hangar and took off shortly after 3 p.m.

Two people who spoke with Houston’s family said the singer would be taken to New Jersey.

The two, who spoke on the condition of anonymity because they weren’t authorized to speak for the family, said Houston’s relatives raised the possibility of a wake Thursday and a funeral Friday at Newark’s Prudential Center, an arena that can seat about 18,000 people. AP