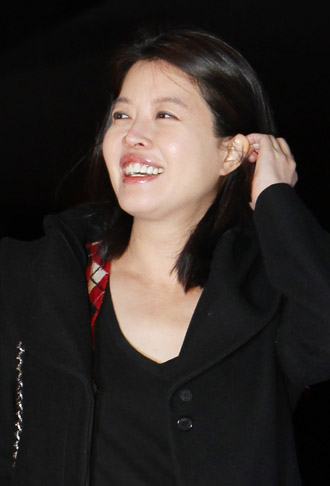 Actress Kim Yeo-jin, 39, gave birth to her first child, a boy, on Monday.

The new mom used her Twitter account to spread the good news. “After 26 hours in labor, the baby arrived, three weeks earlier than planned,” Kim said at 9.30 a.m. after delivering the baby.
Kim is married to TV program director Kim Jin-min, who is currently working on the MBC period drama “Moosin.”
A representative from the program announced that both mother and child are doing fine despite a premature delivery and said the father was present at the birth.
“Kim Jin-min didn’t have to film anything on that day, which meant that he was able to be present for his son’s birth. He is absolutely thrilled,” the representative said.
The couple met on the set of a drama and wed in 2004. Kim Yeo-jin is renowned for such shows as “Can You Hear my Heart” (2011) as well as for her social advocacy.
She made her debut in the play “What Do Women Live For.”