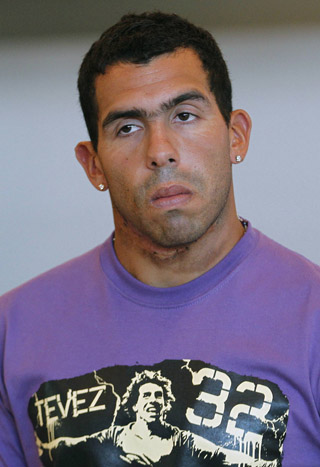 BUENOS AIRES - Carlos Tevez says he was ordered around “like a dog’’ by Manchester City manager Roberto Mancini, but the Argentine striker is now ready to return and play for the club again.

“I hope I can help City be champions,’’ Tevez said in an interview with Fox Sports in Argentina on Monday before his planned return to England.

Tevez has spent nearly three months on unauthorized leave in his native Argentina, continuing a long-running feud with the Premier League leaders that intensified in September when he refused to warm up during a Champions League match at Bayern Munich.

Tevez said Mancini and the club failed to tell the truth about what happened.

He said he was willing to play against Bayern, but was upset at Mancini’s tone of voice when he asked him to warm up in the second half. According to Tevez, Mancini was at the time embroiled in an argument with Bosnian striker Edin Dzeko.

“He [Mancini] ordered me like a dog to warm up,’’ Tevez said. “The club never told the truth publicly about what really happened and that’s why I was angry.’’

His anger prompted him “to grab my things and come [to Argentina] without telling the club. I was upset by the situation and needed to be with my family.’’

But after failing to clinch a move away from City in the January transfer window, Tevez wants to settle his differences with the club.

“I’ve decided to return for personal reasons and turn around the situation and win over the fans,’’ he said. “They turned on me after what happened with Bayern because they were poorly informed.’’

Having initially said it would be “impossible’’ to welcome Tevez back, Mancini’s stance has since relaxed, saying that the striker can play a role for City provided he apologizes for his insubordination that is believed to have cost him around 10 million pounds ($15.8 million) in fines and lost earnings.

“The problems should always be resolved in the dressing room,’’ Tevez said. AP