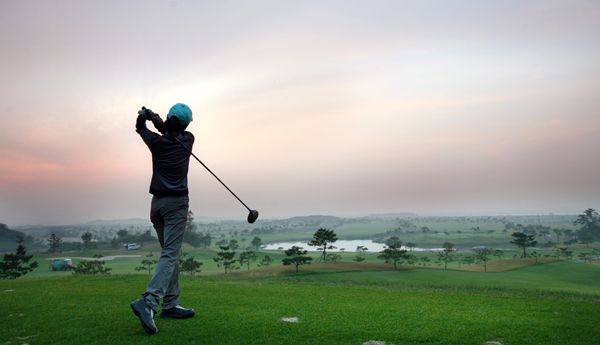 Every successful businessman, high profile politician and top ranking celebrity had to have one, and major business transactions and political agreements were clinched on the links.

But the slowing economy is making those memberships bad investments, and some members are selling to cut their losses.

According to market watchers, the value of golf memberships, just like real estate, soared in tandem with economic growth.

People bought them as investments hoping for large returns.

But membership prices have fallen and what remains of the bubble could burst completely.

This is similar to what has happened to golf courses in neighboring Japan.

In Japan, the price of golf course memberships went deep into the woods in the early 2000s.

Even the Texas-based private equity fund Lone Star, which had a stake in a Japanese golf club, pulled out last year after huge losses in the dwindling business.

The Japanese golf industry in recent years barely made ends meet by selling its memberships at very affordable prices to Korean clients.

But even that business suffered when nuclear pollution fears spread after the power plants in Fukushima were damaged by the tsunami last March.

“Korea’s golf industry is following in the footsteps of Japan’s and it’s time to pull out,” said a 56 year-old entrepreneur surnamed Kim who runs a golf course in Chungcheong.

“I’ve been involved in this business for nine years and I want to sell it off to another investor because it doesn’t make the money it used to. With the money, I will start another business that’s more profitable.”

Kim’s course is still popular among golf lovers because of its nearness to Seoul and it superior quality.

Courses in Seoul, Gangwon and Gyeonggi were the most popular where memberships sold for over 1 billion won.

According to the Korea Leisure Industry Institute, the average price of golf course memberships fell 53 percent in December from the previous year.

Golf memberships are refundable. Normally, clubs in Korea promise to repay members the full amount of the initial membership fees if they want to sell after five years of the purchase of the memberships.

When golf memberships climbed in value, owners could sell them for a profit at private membership trading centers.

With memberships declining in value, some golfers are now demanding refunds.

Park, a 45-year-old golf-loving salary man, got a refund of his membership fee in December.

He bought it for 45 million won six years ago.

“With the 45 million won, I bought a membership at the same golf course for 37 million won, which is the new trading price,” Park said.

“That made me a profit of 8 million won.”

The drop in membership fees is also caused by an increasing number of courses.

The Korea Golf Course Business Association said yesterday that a total of 26.9 million people teed off at Korea’s 410 golf courses last year, only 4.6 percent higher than the previous year.

When the economy was doing very well, banks in Korea competed to lend for golf course developments, but they’re now advised from headquarters to avoid the sector.

Industry sources estimate that around 3 trillion won worth of memberships become refundable this year and they suggested more golfers will choose to request refunds.

“With golf becoming a mainstream sport, people’s ideas of course memberships have changed,” said Seo Cheon-beom, head at the Korea Leisure Industry Institute. “In the past they were buying memberships as investments, but now they’re buying them because they want to play. Membership fees will continue to go down unless the Korean economy improves remarkably. The golf industry must come up with new marketing strategies, not to mention improved facilities and services, to keep their values high.”