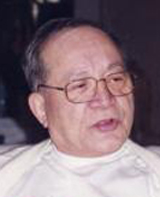 Lee Maeng-hee, the elder brother of Lee Kun-hee, chairman of Samsung Electronics, filed a lawsuit saying he had been robbed of his inheritance and demanded the return of hundreds of millions of dollars in company shares and cash.

According to the Seoul Central District Court yesterday, Maeng-hee, the eldest son of Samsung founder Lee Byung-chull, is demanding that chairman Lee, the third son and one of the wealthiest businessmen in the world, return 8.24 million shares of Samsung Life Insurance, currently worth 716.89 billion won ($637 million), and smaller amounts of shares of Samsung Electronics and cash.

Maeng-hee, 81, formerly a vice president of Samsung Electronics, argued in court records that “the father held the stocks under the names of several Samsung Group executives and they were supposed to be distributed among heirs according to their legally permitted amounts.” He said after the father’s death in 1987, his younger brother didn’t let the other heirs know about the secretly held stocks and pocketed them.

Analysts said Maeng-hee could also expand his suit because he told the court he has the right to about 25 percent of his father’s assets, which could account for 570,000 shares of Samsung Electronics and 8.75 million shares of Samsung Life Insurance, which is owned by Samsung Everland, media reports said.

Media reports said the suit could eventually make claims of between 1 trillion and 2 trillion won.

The elder Lee, who is reportedly in China, found out about his father’s secretly held assets last June, according to media reports.

Among the Samsung family, Maeng-hee is dubbed by the media as the “star-crossed crown prince.”

He was once considered the heir to Lee Byung-chull and got training in positions including vice president of Samsung Electronics. At one point in the 1960s, he served as interim chairman of Samsung Group.

However, his performance apparently wasn’t satisfactory, and he was passed over in favor of Kun-hee. Lee Byung-chull gave his eldest son control of food maker CJ Cheiljedang, which is now part of CJ Group. His son Jae-hyun currently serves as chairman of CJ Group.

Some media have wondered whether the inheritance dispute will be taken up by chairman Lee’s other siblings. Lee has five sisters, one of whom is Lee Myung-hee, chairwoman of the Shinsegae Group.