FTA becomes hot button issue in run up to election

FTA becomes hot button issue in run up to election 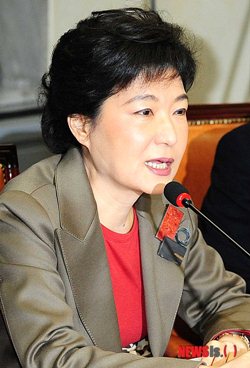 The ruling Saenuri Party is coming out in full force to lash out at the largest opposition Democratic United Party for its “flip-flopping” on the Korea-U.S. free trade agreement, as the treaty is shaping up to be the most divisive issue for the upcoming general election.

Harsh rhetoric from the interim Saenuri leader Park Geun-hye on Monday that the country should not be put under the care of such an about-face party opened a floodgate of criticism against the DUP. Meanwhile, a group of senior Saenuri lawmakers, considered close to President Lee Myung-bak, joined the DUP-bashing regarding the 2007 pact.

The lawmakers, including Chung Mong-joon, former ruling party chairman, and Chung Ok-nim, said the DUP’s negation of the pact, which they call the biggest feat of the former President Roh Moo-hyun and his Uri Party, is a self-contradiction. The DUP is a successor of the Uri Party.

Hwang Woo-yea, floor leader of the ruling party, sarcastically said yesterday that the DUP’s call for renouncing the pact may be because the opposition party is ignorant of the pact, as the DUP is conceding it was when it pursued it as ruling party in 2007.

“It is impossible to manage the Republic of Korea without a firm philosophy on [the issue of] free commerce,” Hwang said.

Dormant bipartisan bickering over the pact was revived on Feb. 8, when DUP Chairwoman Han Myeong-sook called for modification of several “poison clauses” of the Korea-U.S. FTA through renegotiation before it takes effect.

“Otherwise, we will abolish it through the victory of the 19th General Election and the change of power,” Han said.

Later that day, the party delivered a letter demanding renegotiation of the pact to the U.S. Embassy in Seoul, addressed to U.S. leaders, including U.S. President Barack Obama.

President Lee also took aim at the opposition during a cabinet meeting yesterday, saying that the DUP’s visit to the U.S. embassy and delivering of the letter is an act that degrades the country’s dignity.

Citing a current global economic crisis, he said a wrong political decision or a delay of a necessary decision on an important economic issue could affect Korea’s future as long as 10 or 20 years from now.

Park Joo-sun, a DUP lawmaker, said yesterday that Park should first apologize for the ruling party railroading the pact through the National Assembly in October last year.

He called the pact a second Eulsa Treaty, hearkening back to the 1905 agreement which served as a legal basis for Japan’s colonial rule of Korea between 1910 and 1945, saying it will pave the way for America implanting its laws and institutions in Korea.