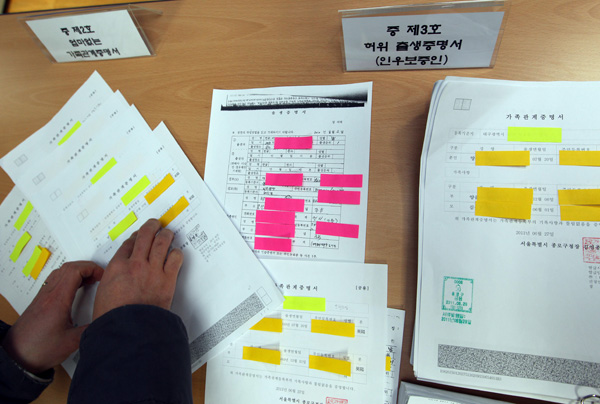 Police show forged birth certificates of newborns of illegal immigrants from Vietnam residing in Korea yesterday at the Seoul Metropolitan Police Agency after booking a team of local brokers. [YONHAP]


The police busted a ring providing fake Korean citizenship for the children of illegal Vietnamese immigrants living in Korea.

The immigrants gave birth in Korea and realized their babies were ineligible for basic health care and were also stateless. They paid around 6 million won ($5,300) per child to get the false Korean citizenship.

Police booked 16 more Koreans, including a taxi driver surnamed Kim, 54, for registering themselves at district offices as the babies’ parents.

Eight more people hired by Lee were booked, according to police, for guaranteeing the births were genuine. If the signatures of two guarantors, who are friends of the newborn baby’s parents, are obtained, a confirmation from an obstetrician is unnecessary to register a birth.

Police said the brokers made a total of 108 million won on the business.

“Children born to illegal immigrants in Korea are not entitled to numerous benefits such as free vaccinations, and the parents are easily tempted to get them fake Korean nationality,” said an officer from the Seoul Metropolitan Police Agency.

After obtaining Korean nationality for the newborns, the fake Korean parents applied for passports for the newborns. Many of the babies were then sent back to Vietnam to live with relatives while their real parents continued working illegally in Korea, police said. Sometimes, the fake parents were paid to bring the babies back to Vietnam, police said.

“Considering the increasing number of illegal immigrants in Korea, measures to root out such crimes are urgently needed,” the officer said.

The police said they plan to see if there are false registrations by illegal immigrants from countries other than Vietnam.