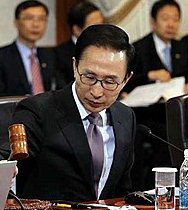 South Korea’s Red Cross yesterday proposed a meeting to discuss reunions of separated families in the North for the first time since the death of the late leader Kim Jong-il.

“Taking into consideration the desire for reunion of separated families, we sent a letter to North Korea through the cross-border village Panmunjom this morning,” Yu Jung-keun, president of South Korea’s Red Cross, said at a press conference yesterday. “In the letter, we reminded them of our efforts to alleviate the pain of families and proposed having a working-level meeting in Kaesong [North Hwanghae Province] or Munsan [Gyeonggi] on Feb. 20.

“Annually, around 4,000 people who have applied for the reunion are dying,” Yu said. “Family reunions are the top priority to be resolved on the basis of humanitarian matters, regardless of the current political situation.”

According to the Ministry of Unification, 21,734 people of 4,321 families have seen each other in 18 reunions held since 2000, through face-to-face or video meetings. More than 80 percent of the people who applied for the reunions are in their 80s.

During the Lee Myung-bak administration, there have been two family reunions, in September and October of 2009 and in October and November of 2010.

The Red Cross delegates of the two Koreas were supposed to have a meeting in November 2010, but the North shelled Yeonpyeong Island and the meeting was scrapped two days before it was scheduled to take place.

“If talks for a reunion are held, we could discuss a variety of issues, including offering humanitarian aid to the North,” a Unification Ministry official told reporters on the condition of anonymity. “We expect North Korea to respond to the letter positively.”

Asked if the proposal is related to the upcoming ministerial-level meeting between North Korea and the United States in Beijing, the official said, “The North Korea-U.S. contacts have been carried out since July, and this proposal has nothing to do with the contact.

“Given the previous cases, we expect North Korea to reply within two days, and if they accept the proposal, the reunion would likely be held before April, ahead of the general election,” the official said. “We won’t suspend the talk because of the election because issues like humanitarian aid are nonpolitical, no matter how politicians are trying to use them.”