Kim hopes to regain his wings in Super League

Kim hopes to regain his wings in Super League 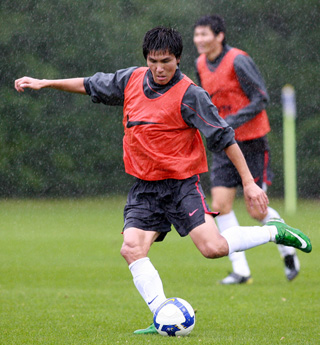 In this Sept. 1, 2008, file photo, Kim Dong-jin works out during a training session at the National Football Center in Paju, Gyeonggi. By Lim Hyun-dong

After a disappointing 2011 season in the K-League, footballer Kim Dong-jin hopes to regain his “golden wings” with the China Super League’s Hangzhou Greentown FC. The versatile 30-year-old, known best for his solid play as a winger, had the worst season of his career last year, playing only nine matches and leaving many declaring him finished.

But Kim, as defiant as ever, will look to restore his past glory in China. The left-footed player agreed to a one-year contract with the Hangzhou side last week.

Kim started his professional career in 2000 with the Anyang LG Cheetahs, now FC Seoul. He became a regular on the pitch in 2003, when he also made his national team debut.

The following year he played a pivotal role in the Athens Olympics to help Korea to reach the quarterfinals for the first time since 1948.

His rise continued at the 2006 World Cup in Germany, when Kim competed with veteran Lee Young-pyo for the left-back position.

After the World Cup, he moved to Russia’s FC Zenit St. Petersburg with fellow midfielder Lee Ho and national team coach Dick Advocaat, where he won the UEFA cup in 2008.

But plagued by minor injuries, Kim began to lose playing time to other rising stars. In 2009, he fainted during a national team training session, raising medical concerns that led to a contract termination with the Russian club.

Kim returned to the K-League after signing with Ulsan Hyundai FC in 2010, but his performance was unlike in the past. He moved to FC Seoul hoping to relive his glory days in the capital, but it turned out to be his worst season yet.

In an interview with Ilgan Sports, the JoongAng Ilbo’s daily sports newspaper, Kim said he is ready for a new challenge in China and hopes he can return to the national team.

Q. Why did you choose Hangzhou?

A. Along with Hangzhou, Dinamo Kiev of Ukraine and three teams from Japan were interested in me. I know Kiev is a good team because former AC Milan player Andriy Shevchenko is currently playing there. But after a lot of consideration I chose Hangzhou because coach [Takeshi] Okada approached me directly. He valued my experience.

What do you think about playing with Jung Dong-ho, who will join the team on loan from the Yokohama Marinos?

In the past, when I was with Zenit, I played with Hyun Young-min [currently with FC Seoul] and Lee Ho [Ulsan] and I know Korean players can rely on each other when they are in a foreign country. I heard Jung is a good full back. Along with him, I will work hard to get consistent time on the pitch and start off well during our training camp in Shizuoka, Japan.

What do you think about Chinese teams that are investing heavily in foreign players?

I think it’s a good opportunity to face a lot of good players from many other countries. I’m especially looking forward to meeting Nicolas Anelka who moved to Shanghai Shenhua from English club Chelsea. My first goal is to win a regular season championship with coach Okada and help the team to reach the AFC Champions League.

What do you think about your roller-coaster football career?

Last year I had a difficult time with FC Seoul. My friend Cho Jae-jin provided a lot of support despite being busy with his marriage. I think I have learned a lot despite losing. This year will be the year I return to my old form after shrinking.

Have you seen the new national team squad?

Yes. I saw my good friends such as Choi Tae-wook, Ha Dae-sung and Oh Beom-suk rejoining the national team.

I also gained hope from that. As a football player, we all have a dream to play for the national team and compete at the World Cup. I was honored to be compared to Lee Young-pyo. But I’m over my past.

If I work hard for my club, I believe I will get a chance to be back with the national team. I will do everything I can in order to play at the 2014 FIFA World Cup in Brazil.