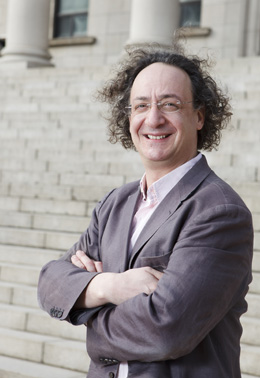 In this digital age, many online news sites have space for readers’ comments below the articles. Can the same strategy of engagement apply to art museum Web sites? What would happen if museum sites had space for comments below images of art works or exhibits?

This is what Britain’s Tate, one of the hottest and most aggressive museum organizations in the world, will do in an experiment that is part of the redesign of its Web site (www.tate.org.uk) later this month, according to Marc Sands, director of Audiences and Media at the Tate.

“In ten days, we are relaunching our Web site, which is all about completely opening up the Tate,” Sands said in a press meeting at the Deoksu Palace branch of Korea’s National Museum of Contemporary Art in Seoul on Monday. “It will allow people to come in, search, ask questions and discuss with curators in a wholly different way of approaching art. All barriers of artistic institutions are coming down.”

Sands has come here to discuss with NMOCA a strategy for museums to get closer to the public. Throughout the press event, he emphasized the importance of interacting with viewers through the Web and social networking services. 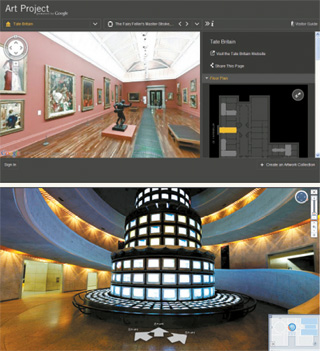 In images captured from the Web sites, a room in the Tate Britain in London, top, as seen through the Google Art Project’s virtual museum. A view of Ramp Core, the centerpiece of Korea’s NMOCA in Gwacheon, above, as seen through Naver’s Museum View service.

“Online development allows the audience to be completely involved with the artworks - instead of seeing them from a distance,” he said.

Comment sections on museum sites will prompt discussion about the art works and exhibitions.

“The discussions could sometimes be good and sometimes bad, as I’ve seen with new sites,” said Sands, who formerly worked as the marketing director of The Guardian newspaper. “Be it good or bad, generating discussion is important.”

“But most art galleries are reluctant to interact with audiences because they are very nervous about public opinion,” he added, saying that few museums worldwide have such interactive online systems.

The Tate’s site is already strong, compared to other museums. Tate Online, which launched in 1998, is considered the Tate’s fifth gallery, alongside its four existing galleries - the Tate Britain, Tate Modern, Tate Liverpool and Tate St. Ives.

Sands also said that the Tate is the first museum to join the Google Art Project, which enables Internet users take virtual tours of 17 museums including the Museum of Modern Art in New York and the State Hermitage in St. Petersburg. Visitors to the site can go through the museums’ halls and exhibition rooms in a virtual space built with cameras similar to the ones used for Google Street View. In addition, select artworks can be seen in incredible detail by using the service’s zoom function.

Korea’s NMOCA plans to join the Google Art Project as early as May. The national museum has already launched its “Museum View” in cooperation with Naver, the country’s largest Internet portal.

People can now use the service through Naver maps, but the service will be linked to NMOCA’s homepage (www.moca.go.kr) soon, museum officials said.

Sands said that museums worldwide should be less conservative in how they deal with the public. “My question is: Why are only 17 museums participating now?” he said, adding that nobody can be sure what will happen in the digital era so people should “experiment and try.”

One problem, however, is copyright. It is not the Tate Modern but the Tate Britain that is now participating in the Google Art Project. Most of the Tate Britain’s collection consists of works by old masters whose copyrights have expired.

Responding to this, Sands said, “That’s why the Chris Ofili’s ‘No Woman No Cry’ is the only contemporary art work that the Tate Britain presents as part of the Google Art Project.”

Meanwhile, the redesign of the Tate’s site will also include an upgrade of its search engine, which “will enable everyone from children to experts to browse all of its collections in ways that feel easy,” Sands said.

The Tate is one of the most beloved museums worldwide. Its four offline galleries collectively hold about 72,000 works and attract over 7 million visitors every year. In particular, the Tate Modern, which used to be a power plant, is considered to have brought contemporary art from the fringes of culture to the mainstream in London, which is now the most important hub of contemporary art next to New York, according to Sands.