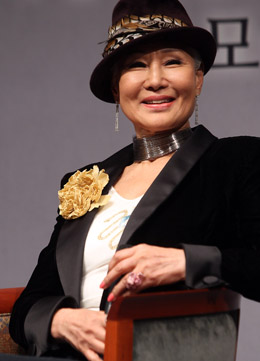 Patti Kim announces her retirement at a press conference at the Korea Press Center in central Seoul yesterday. [YONHAP]

In many ways, this year seemed as good as any to announce the end of a stellar singing career, with many speculating that it was probably because of health concerns, yet it still seemed so out of character for the pioneering Hallyu performer who, at 74, has lived and breathed music for most of her life.

Kim began her career in 1958, performing for the U.S. 8th Army Corps under the stage name of Linda Kim. Since then she has captured the heart of the nation with hits such as “Seoul Anthem,” “Can’t Forget” and “The Thorn Birds.” She was much loved overseas as well, having been the first Korean singer invited to perform in Japan in 1960, a first since Korea’s liberation from Japanese colonial rule.

Kim has never used her age as an excuse not to perform, which made the announcement all the more shocking.

In 2008, the singer toured the nation to commemorate her 50th anniversary. At the concert, Kim wowed audiences with her powerful and energetic stage presence.

“It was a difficult decision for Kim, as she cannot imagine a life away from the stage,” a representative from the singer’s agency said. “Nevertheless, because of difficult circumstances taking place in her life, she has decided to say goodbye to performing.”

Rumors about her retirement began circulating last year, though nothing had been confirmed until now.

When the singer walked into the press conference wearing red heels and a decorative fedora, she looked to be the picture of good health. But the question on everyone’s lips was whether she was retiring for health-related reasons. A journalist who asked only got halfway through the question before the singer shot up, stuck a hand on her hip and asked, “Don’t I look good?” as the room erupted into laughter.

The singer’s charisma and wit was still evident as she went on to joke that on the days she really missed being on stage she would sing in front of the mirror.

She went on to say that her health was of no concern, as she still manages to swim 1,500 meters with ease and engages in a daily regime of four to five kilometers of walking.

“If anything it’s because I am in good health that I’ve decided to retire,” Kim said. “I don’t want my last years in the public eye to be of an old and ailing Patti Kim. I want fans to remember me as being in good health, in the way I am now.”

“I’ve been waiting for the perfect time to retire for the last 10 years, and right now just seems like the perfect time,” she said. “I will take off with only the fondest memories, totally content and with no sorrows at all.”

But it wouldn’t be like Kim to go out without a bang, and that’s why she announced that starting June 2, she will launch a world tour to say her farewells to fans worldwide. During the year-long tour, Kim will show her gratitude to her fans with a repertoire consisting of more than 25 hit songs from her heyday.

“Sunset is the most beautiful form of the sun, the way it just tinges the whole sky in an orange glow,” Kim said. “I guess you can say that’s how I want to fade out, just like the setting sun.”